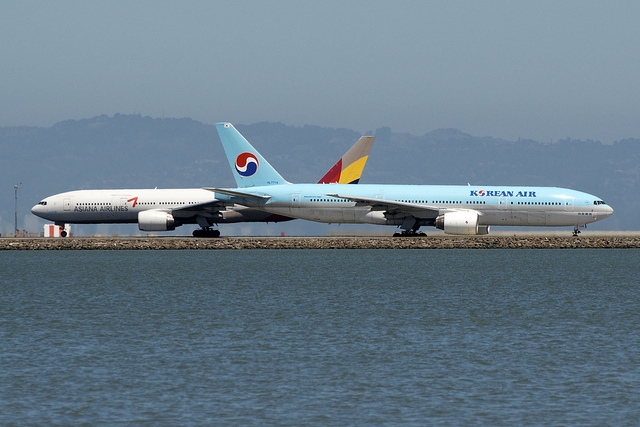 SEOUL, Oct. 20 (Korea Bizwire) – Korean Air Lines Co. and Asiana Airlines Inc., the country’s two major air carriers, are being shunned by institutional investors in the local debt market as they fret over their high indebtedness, although their third-quarter earnings are forecast to be better than expected, industry sources said Thursday.

According to the sources, Korean Air attempted to sell bonds worth 150 billion won (US$134 million) earlier this week, to repay maturing debts, but not a single institutional investor expressed an intention to buy the proposed debt offering. In February and April, the air carrier also failed to sell its proposed debt worth 400 billion won through a publicly placed debt sale scheme.

Instead, Korean Air is seeking to float the debt through a privately placed scheme.

Separately, Korean Air is reattempting to sell $300 million worth of debt with a 30-year maturity this month, after failing to meet investors’ demand for higher coupon rates. But industry sources said it is unclear whether it will be able to push ahead with the debt offering amid lukewarm response.

The sources said Korean Air is expected to have logged market forecast-beating business results for the third quarter, aided by rising air traffic and low oil prices, but its high debts, standing at some 6 trillion won as of end-June, and the possibility of assisting its money-losing affiliates, are sapping investors’ appetite for the debt offering.

“Korean Air is moving to beef up its hotel and leisure businesses, and we may review the rating for Korean Air if it continues to support its affiliates,” said Kim Yong-kum, a researcher at KIS Rating Co.

Analysts say the debacle involving its affiliate Hanjin Shipping Co. ignited worries that the airline’s cash flow may further worsen down the road.

“Institutional investors seem to be avoiding even debt offerings by top-rated firms, out of concerns that they could go bankrupt,” said Park Tae-woo, an analyst at Samsung Securities.

Analysts say a slew of troubled companies, such as Daewoo Shipbuilding & Marine Engineering Co., coupled with a widely expected rate hike in the U.S., have scared institutional investors out of the debt market.

Industry sources said investors are speculating that Asiana Airlines may chip in cash to help its parent Kumho Group take over Kumho Tire Co., which is up for sale, a deal estimated at 1 trillion won.

In a bid to raise cash, Asiana Airlines sold a stake in a bus terminal operator for 270 billion won. The company is also seeking to sell shares worth 166 billion won.

Asiana’s debt ratio stood at some 900 percent at end-June.