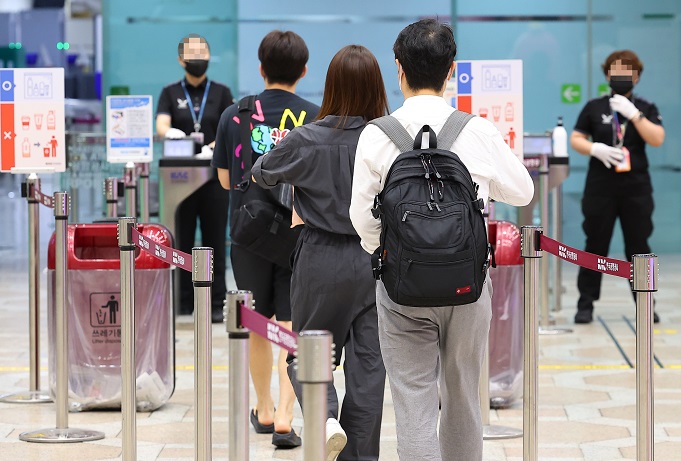 Passengers enter a boarding gate at Gimpo International Airport in Seoul on June 29, 2022, to head for Haneda Airport in Tokyo as the flight service between the airports reopened after two years and three months of suspension due to the pandemic. (Yonhap)

Korean Air and Asiana will operate two flights per week on the Haneda route, respectively, while All Nippon Airways Co. and Japan Airlines Co. will provide a total of four flights a week as well, according to the Land, Infrastructure and Transport Ministry.

The four airlines operated a total 21 flights a week on the Haneda route in 2019 before the pandemic hit the airline industry.

The number of flights will increase in phases starting next month, depending on travel demand and preparations by airliners, the ministry said.

People welcomed the resumption as both airports are much closer to city centers.

“I have previously used the Incheon-Narita route but changed my ticket to this Gimpo-Haneda route as it is more convenient. I plan to use this route from now on,” Cha Ki-cheol, a 42-year-old passenger, told Yonhap News Agency before boarding a Korean Air Lines flight.

A total of 2.05 million people used the Gimpo-Haneda route, with an average of 21 flights per week in 2019, according to data from an airport operator.