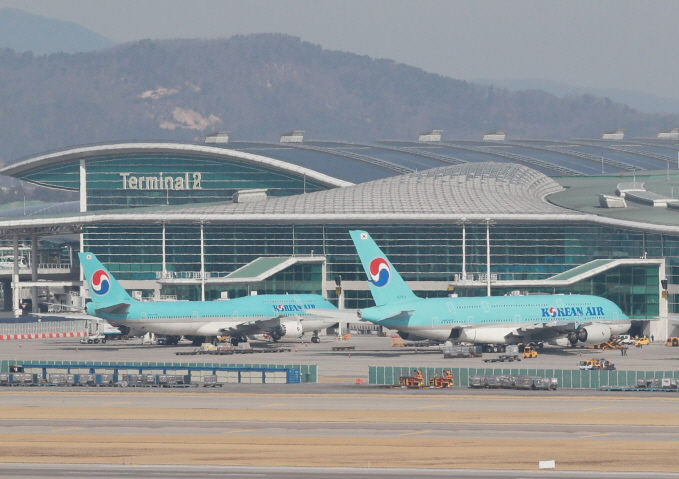 This photo taken on Feb. 6, 2020, shows Korean Air planes at the Incheon International Airport in Incheon, just west of Seoul, amid the spreading coronavirus. (Yonhap)

In June, Korean Air already extended mileage points due to expire at the end of 2020 by one year to 2021 as travel demand dried up due to the pandemic.

With the additional mileage extension, Korean Air plans to kick off its revamped SKYPASS mileage program in April 2023, two years later than the originally scheduled April 2021, the company said in a statement.

The company will introduce the option to use a combination of miles and cash or credit card to purchase tickets during a test-run period from Jan. 7, 2021, to Dec. 31, 2022, the statement said.

In June, its smaller rival Asiana Airlines Inc. also extended mileage points set to expire at the end of 2020 by one year.

The country’s two full-service carriers followed recommendations from the transport ministry and the anti-trust regulator.

The two airlines have suspended most of their flights on international routes since March as countries have strengthened their entry restrictions to stem the spread of the pandemic.

Korean Air is in the process of acquiring Asiana in a deal worth 1.8 trillion won to seek economies of scale and better compete with its bigger rivals.