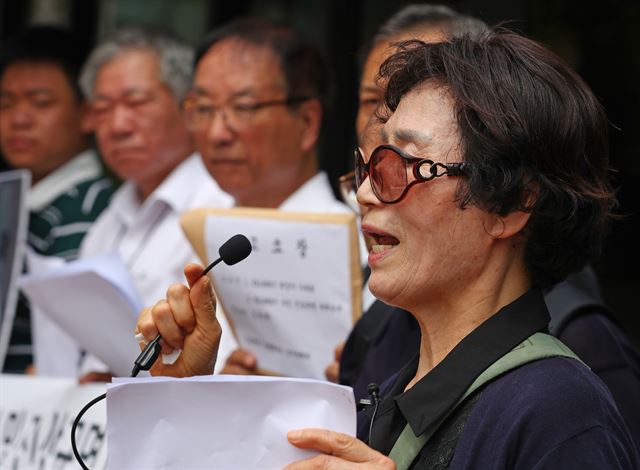 The bereaved family members of the victims of the KAL 858 bombing hold a news conference on their filing of a lawsuit against its culprit Kim Hyun-hui in front of the Seoul Central District Court on July 23, 2018. (image: Yonhap)

SEOUL, Jul. 23 (Korea Bizwire) — The bereaved family members of the victims of the mysterious mid-air bombing of a South Korean passenger jet in 1987 on Monday sued the culprit, Kim Hyun-hui, a female North Korean former terrorist, for libel and obstruction of business, while calling for reinvestigation of the case.

Prior to filing the suit with the Seoul Central District Court, they claimed at a news conference, “There was no objective evidence to verify that Kim is a North Korean terrorist or that the plane in question was blown up.”

In particular, Kim Ho-soon, head of the group, insisted the group’s own probe has found that Kim was not a North Korean spy but an agent from the South Korean spy agency under the Chun Doo-hwan government.

According to the official findings of South Korean government probes into the disappearance of Korean Air Flight 858 in 1987, Kim and another North Korean agent planted timed bombs on the plane and exploded it near Myanmar, killing all 115 people on board. Kim made a failed attempt to commit suicide shortly before being arrested. She was sentenced to death at a Seoul court in 1990 and pardoned later that year. She is now living in South Korea as a housewife.

Then, North Korea strongly denied the charges that made the U.S. blacklist the North as a terror-sponsoring state in 1988.

But the family members have long raised suspicions that the incident was possibly arranged by the South Korean government two months ahead of the presidential elections, and the government of leftist President Roh Moo-hyun re-examined the case in 2004, with no reversible outcomes.

“The announcements made by the government on the incident at that time were dependent wholly on Kim’s confession,” they asserted in the suit, while demanding a reinvestigation.

On reasons for suing, the family members said Kim has decried their activities to find the truth as “pro-North Korean” several times on conservative cable channels and Internet news media while refusing to meet them.

In an interview with Chogabje.com in January, which was posted later on YouTube, Kim branded an organization of activists, lawyers and religionists seeking the KAL 858 truth as a “pro-North Korean and treacherous group,” the insisted.

In an interview with Voice of America in November, Kim also condemned such activities as acts of disregarding the truth and ideologically defending the North, they pointed out.

“Such remarks have overtly harmed our reputation and impeded our activities to find the truth,” they claimed.