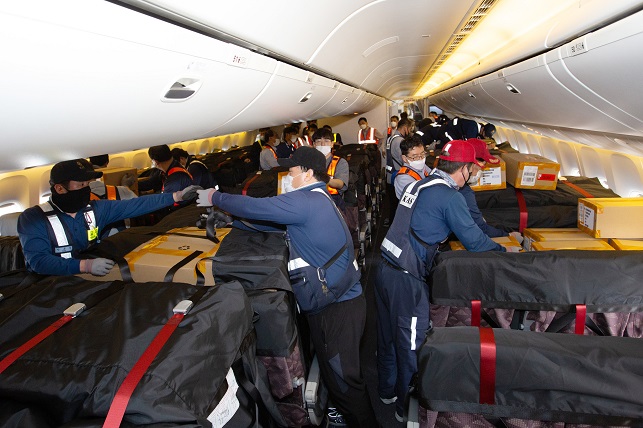 Korean Air began to carry cargo in cargo seat bags, which attach to the seats of passenger jets, on June 11 as the COVID-19 pandemic drove down air travel demand and its earnings. (image: Korean Air)

Korean Air will consult with the Ministry of Land, Infrastructure and Transport to remove seats on some of its 26 B777-300ER passenger jets and fill them with cargo, a company spokesman said over the phone.

“We are aiming to start operations of the converted planes next month upon approval from Boeing and the transport ministry,” he said.

Korean Air expects its overall cargo volumes will increase by at least 10 tons to 34 tons if the conversion plan is approved.

It began to carry cargo in cargo seat bags, which attach to the seats of passenger jets, on June 11 as the COVID-19 pandemic drove down air travel demand and its earnings.

The move is in line with global airlines, which are now using their passenger planes for cargo flights, either by using cargo seat bags or removing seats.

Its net losses widened to 736.86 billion won in the January-March quarter from a loss of 116.95 billion won a year earlier due to suspended flights and the won’s weakness that increased the value of foreign debts.

Korean Air had 70 percent of its 20,000-strong workforce take paid leave for six months starting April 16 as a measure to overcome the prolonged crisis caused by the COVID-19 pandemic.

Early this month, the company said it will sell its in-flight catering and duty-free business to a private equity fund for an estimated 1 trillion won.