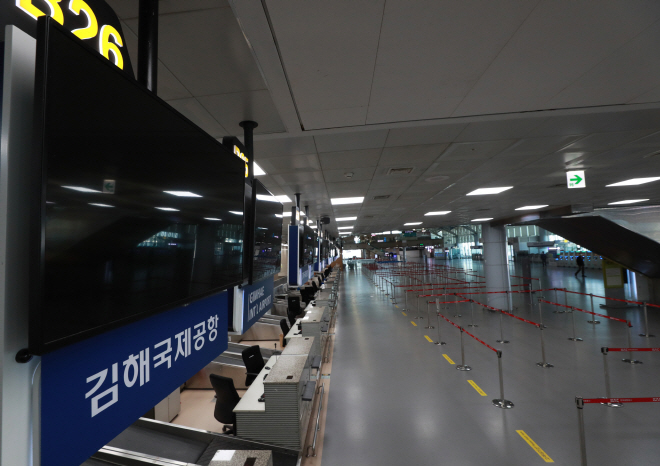 The vacant Gimhae International Airport in Busan, 450 kilometers south of Seoul on on March 23, 2020, amid the spreading coronavirus outbreak. (Yonhap)

Asiana Airlines Inc., the country’s second-biggest airline, said it has canceled its direct flights to Beijing scheduled for Thursday and Saturday this week, and that it will decide by Tuesday on whether to suspend the operation of the route.

Asiana had previously operated 25 routes to China, but only nine routes are in service as of Monday, a company spokesman said.

The move comes as China steps up efforts to keep out imported COVID-19 cases.

On Sunday, the Chinese aviation authorities announced that all international flights bound for Beijing will first land at one of 12 designated airports for health checks from Monday before being allowed into the capital city.

More than 90 percent of Korean Air’s 32 routes to the neighboring country are not operating.

Korean Air and Asiana have already suspended most of their flights on international routes as an increasing number of countries close their borders or take further measures against incoming passengers.

Korean Air has suspended 10 out of 12 European routes, with reduced flights on the Incheon-London and Incheon-Paris routes. Asiana is currently running its Incheon-Frankfurt route, with six other European routes not in service.

Local airlines have been struggling with a sharp decline in air travel demand since Jan. 20, when South Korea reported its first case of COVID-19. 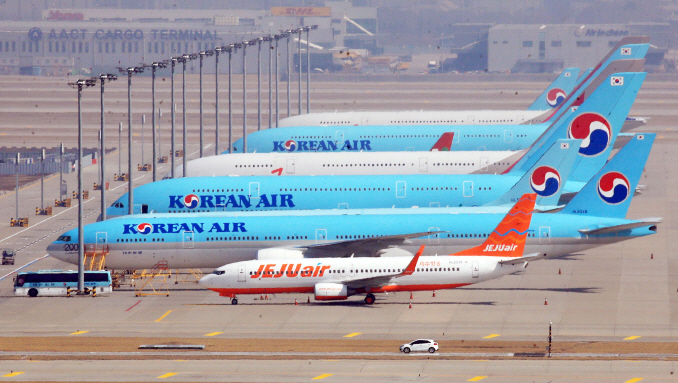 Adding to the airlines’ woes, Japan on March 9 adopted a temporary 14-day self-quarantine period for people flying from South Korea and China and asked them to refrain from using public transport.

The move prompted Korean Air to suspend 16 of its 17 routes to Japan starting March 9, the remaining one being the Incheon-Narita route.

Asiana suspended all of its flights to Japan for the March 9-31 period due to Japan’s entry restrictions. It previously operated 11 routes to eight Japanese cities.

Eastar Jet Co. said it will shut down for one month from Tuesday through April 25.

“The company will enter a more drastic restructuring to survive the current crisis and the shutdown decision is an inevitable option the company can take to minimize the fallout from the virus outbreak,” Eastar Chief Executive Choi Jong-gu said Monday in a message to his employees.

Jeju Air Co., the country’s largest low-cost carrier, is currently serving two routes — from Incheon to Tokyo and Osaka — down from 15.

Five other budget carriers — Jin Air Co., Air Busan Co., Air Seoul Inc., T’way and Fly Gangwon — suspended all or most of their flights on international routes. Most of them have entered an emergency management system to stay afloat.

Moody’s Investors Service said global airlines’ capacity will be cut by 40 to 60 percent or more for the second quarter of 2020 as the airline industry is one of the sectors most stressed by the coronavirus outbreak.

But the global ratings agency expected smaller airlines with less liquidity to be more exposed, noting there is potential for some of them to collapse within a short period unless there is additional support from their governments.

Airline stocks continued to plunge on the increased number of suspensions.

South Korea has reported 8,961 confirmed coronavirus cases and 111 deaths as of Monday.