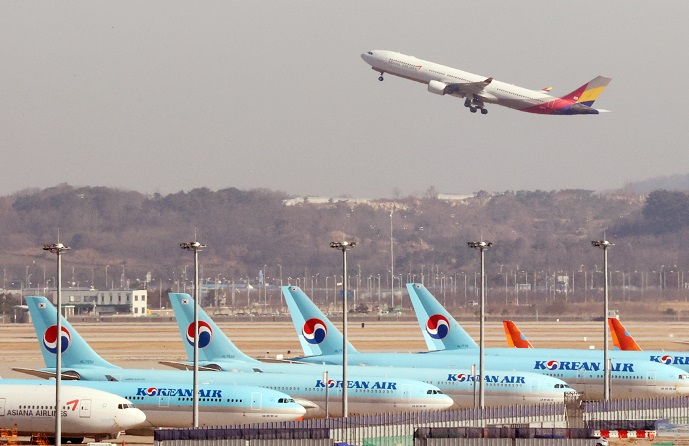 Korean Air plans to sell 3.3 trillion won (US$3 billion) worth of new stocks, which is higher than the originally planned 2.5 trillion won to finance the acquisition of debt-laden Asiana, due to its soaring stock price, the company said in a regulatory filing.

The national flag carrier plans to issue 173.6 million shares at 19,100 won per share, which is higher than the originally planned 14,400 won. The price will be finalized on Feb. 26, the filing said.

Korean Air has been conducting due diligence on Asiana since December to look into Asiana’s cost structure, contracts and other details as it is scheduled to come up with a post-merger integration plan by March 17.

To proceed with the deal, Korean Air submitted documents by Jan. 14 to antitrust authorities in the countries to which the carrier flies for review of the merger.

The countries include the United States, the European Union, China and Japan.

Korean Air expects no major problems in obtaining approval from overseas for the merger of the two airlines given that bigger merger deals went smoothly in the past.

Korean Air and Asiana account for a combined 40 percent of passenger and cargo slots at Incheon International Airport, South Korea’s main gateway. It does not constitute a monopoly, the company said.

The two airlines have suspended most of their flights on international routes since March as countries strengthen their entry restrictions to stem the spread of the pandemic.