SEOUL, Korea, Mar 28 (Korea Bizwire) – The Ministry of Agriculture, Food, and Rural Affairs and the Korea Food and Drug Administration proudly announced that, as of March 26 (local time), the United States Department of Agriculture (USDA) has officially approved Korea as an exporter of processed poultries which has opened up the gates for Korea’s famous chicken soup with ginseng, “samgyetang,” to be exported to the States.

Exporting homemade samgyetang to the U.S. has been a long-cherished wish of the poultry farmers in Korea. Thanks to the consistent negotiations between both countries’ quarantine authorities and the recent efforts of the “Private and Public Joint Conference for Export Pioneering” consisted of the industry representatives and related government agencies such as the Korea Food and Drugs Administration which has been held since January 2014, a big hurdle for samgyetang to go global has finally been cleared.

The USDA approval for processed poultry exports means that the U.S. government acknowledged the sanitation standards of Korea’s food processing business as of the similar level as theirs. The domestic livestock industry expects the approval will serve as a catalyst for exporting not only samgyetang but also other processed poultry products.

The USDA has published the finalized law which approves Korea as an official exporter of processed poultries to take effect in 60 days after the proclamation, according to the U.S. Federal Register. 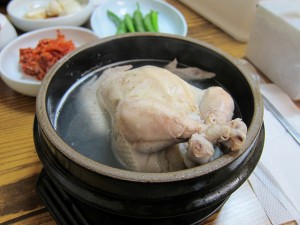 Exporting homemade samgyetang to the U.S. has been a long-cherished wish of the poultry farmers in Korea. (image: eekim/flickr)

The Korean Ministry of Food will cooperate with the U.S. government to process the remaining administrative procedures including the discussion of the terms of the quarantine certificate and the registration of the workspaces for samgyetang exports. The actual samgyetang exports to the States are likely to begin within the first half of 2014.

The Ministry of Food plans to support the samgyetang exports by providing supervision and training to meet the quarantine and sanitation standards in collaboration with the Korea Food and Drug Administration, and carry out various marketing and promotion projects.