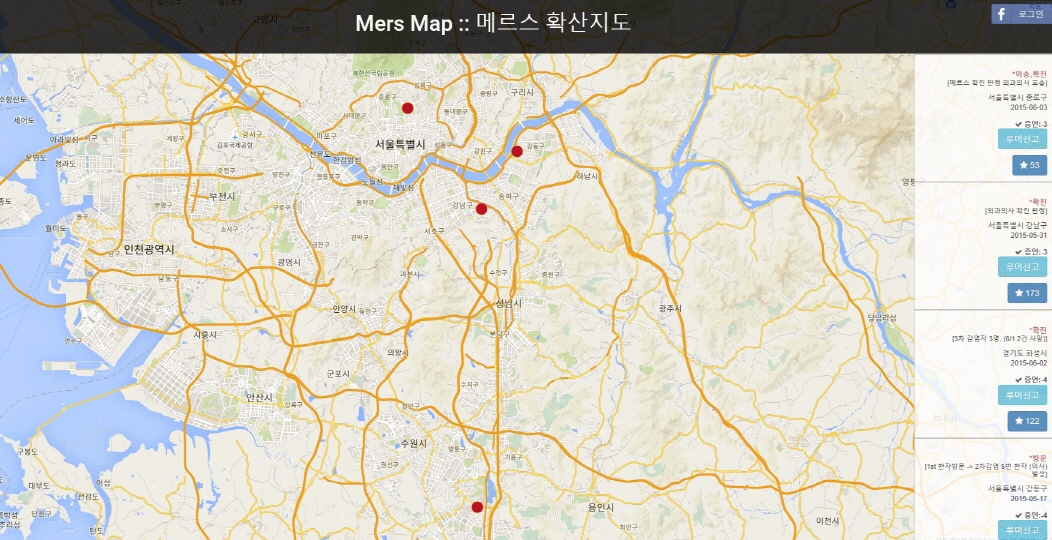 The site is currently accepting reports from the general public about hospitals that housed MERS patients. (image: web site)

SEOUL, Jun. 5 (Korea Bizwire) – A web site that claims to share information about hospitals where individuals have been treated for, diagnosed with or isolated for the MERS virus, is becoming immensely popular.

As the Korean government continues to withhold such information from the public, citizens are doing everything they can to share information, out of distrust built upon the government’s seemingly lax handling of the situation.

According to IT industry representatives on June 4, the web site shows regions and names of 14 hospitals, a number also mentioned in information shared by the government.

The web site once saw 500 concurrent users visiting at a time on June 3, and server capacity has already been upgraded to handle the flood of visitors.

The site is currently accepting reports from the general public about hospitals that housed MERS patients.

As the web site owner is aware of how citizens have been affected by groundless rumors while sharing the information on SNS, the site only accepts reports from individuals logged in with their Facebook ID who provide information backed by clear evidence or information from media coverage.

Many netizens are welcoming the site and sharing it on SNS, with some of them even volunteering to develop an app version.

A map of the MERS outbreak created by an IT developer is also getting attention from SNS users. The map has been already shared more than 3,000 times on Facebook.

According to a survey conducted by research company Real Meter on June 2, 82.6 percent of 500 polled Koreans wanted the government to disclose information about the MERS-affected hospitals.

The Korean government is sticking to its policy of silence, as detailed information could evoke unreasonable fear and cause greater damage to the hospitals.