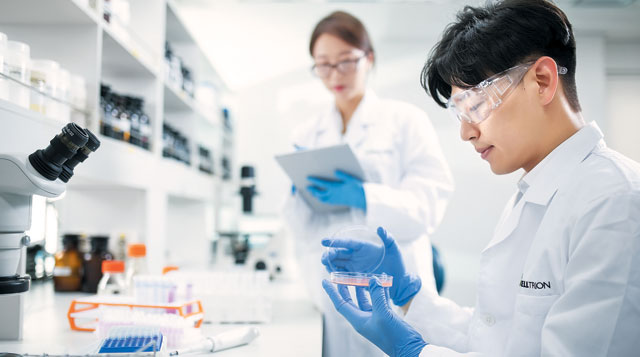 Celltrion Inc. said sales of its drug Remsima SC for the treatment of autoimmune diseases are set to kick off in Europe in March. (image: Celltrion)

SEOUL, Jan. 24 (Korea Bizwire) — South Korea’s major pharmaceuticals manufacturers have set their sights on overseas markets this year as a string of their biosimilars are waiting to be approved or launched, industry sources said Friday.

Celltrion Inc. said sales of its drug Remsima SC for the treatment of autoimmune diseases are set to kick off in Europe in March.

In November, the European Medicines Agency (EMA) gave the green light to Celltrion’s application to sell the subcutaneous (SC) version of Remsima, a biosimilar copy of Janssen Biotech, Inc.’s Remicade.

Celltrion Healthcare, which handles Celltrion’s overseas business, will directly sell Remsima SC starting in Germany in March, with shipments in the United Kingdom and the Netherlands slated for the first half of the year, according to the sources.

The SC version allows patients to inject it by themselves, unlike the intravenous formulation that requires patients to visit hospitals.

In July, Samsung Bioepis submitted an approval to the EMA for the sale of SB8. It sought the U.S. Food and Drug Administration (FDA) approval in November, they said.

The company also said it will launch its biosimilar cancer drug Ontruzant in the United States during the first of this year after receiving approval more than a year ago.

Ontruzant is the breast cancer treatment biosimilar referencing Roche’s Herceptin. It is already sold in Europe.