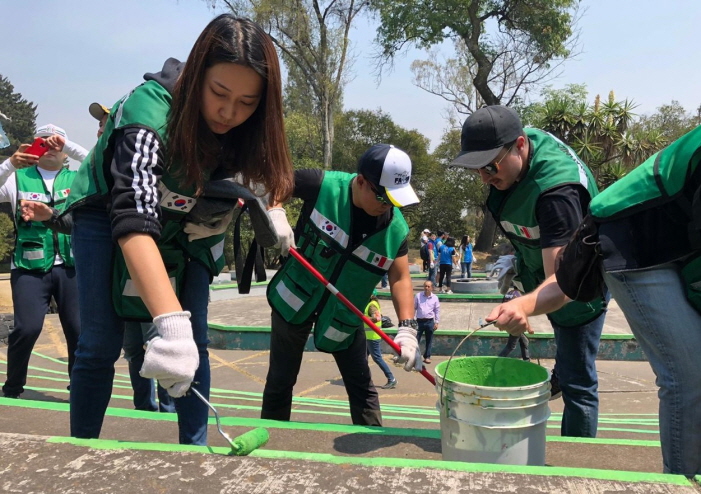 Participants in the Tequio Program collected trash, planted plants, and painted buildings in the 3rd district of Chapultepec Park. (Yonhap)

In Mexico’s capital city, some 150 people including the mayor of Mexico City, government officials, Korean expatriates, the Korea Trade-Investment Promotion Agency (KOTRA) officials, and other associations of commerce participated in the Tequio Program at a local park on Saturday.

Participants in the Tequio Program collected trash, planted plants, and painted buildings in the 3rd district of Chapultepec Park.

Tequio is an expression in Nahuatl, an indigenous language in Mexico, which means to work together voluntarily to contribute to the local community.

Claudia Sheinbaum, mayor of Mexico City, is enthusiastic about the program as she carries out her intent to promote the harmony and growth of local communities in Mexico City.

The South Korean embassy in Mexico decided to hold the program after seeing that Tequio is a concept familiar to Korean traditions of cooperation, which can also serve as an opportunity to share good customs between South Korea and Mexico.

“The fact that Korean expatriates, public agencies, and the private sector participated in a volunteer program to create a more beautiful Mexico City indicates that they intend to contribute to Mexican society not as outsiders, but as citizens,” said Kim Sang-Il, South Korean ambassador to Mexico.

“We hope that the initiative can be used as an opportunity for both countries to share their spirit of cooperation.”

Sheinbaum thanked the members of the Korean community who participated in the program, pointing out that Koreans are “the first foreign community to participate in a Mexican traditional program.”

Korean expatriates and public agencies plan to hold series of Tequio activities at parks and streets this year under the auspices of the South Korean embassy.