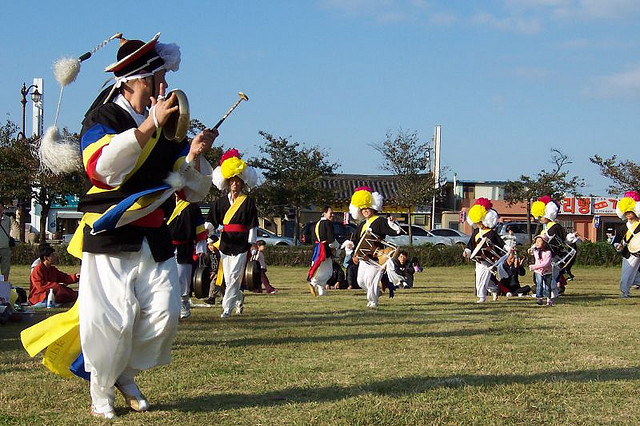 Korean farmers usually played it to relieve their fatigue after they did their strenuous farm work or on holidays. (image: Ian Morgan/flickr)

The Cultural Heritage Administration in South Korea announced on October 29 that a subsidiary body of the Intergovernmental Committee for the Safeguarding of the Intangible Cultural Heritage recommended Nongak, literally meaning “farmer’s music,” to be included on the list. Farmers usually played it to relieve their fatigue after they did their strenuous farm work or on holidays.

Its recommendation is almost always reflected in the result of a meeting of the committee to be held on November 24 to 28 at the headquarters of UNESCO. Therefore, it is highly expected to become one of global intangible cultural heritages.

Six versions of Arirang of North Korea are also recommended to be on the list. Arirang is a Korean folk song, which has a lot of variations depending on the region with the same refrain of “Arirang arirang arariyo.” Those six versions from Pyongyang, South Pyeongan Province, South Hwanghae Province, Gangwon Province, North Hamgyong Province and Jagang Province in North Korea would be the country’s first heritage on the UNESCO’s list. South Korea’s Arirang was already listed in December 2012.

Of the heritage applications, the subsidiary body recommended 32 heritages to be inscribed, ordered six items to add more information on the application and dropped eight.