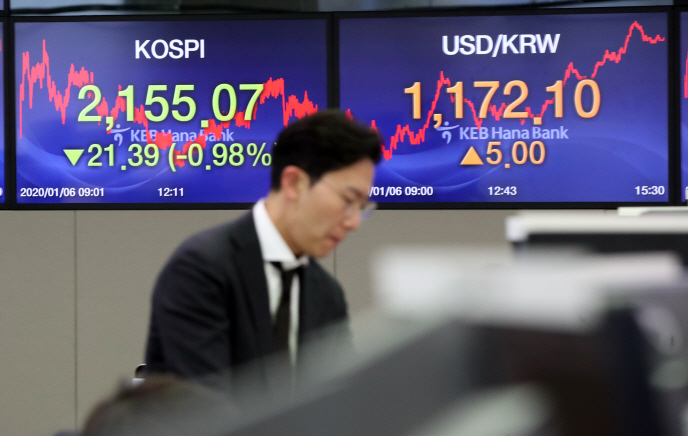 An electronic signboard at the KEB Hana Bank in Seoul shows the benchmark Korea Composite Stock Price Index (KOSPI) down 0.98 percent to close at 2,155.07 due to mounting tensions in the Middle East on Jan. 6, 2020. (Yonhap)

The price of South Korea’s benchmark Dubai crude stood at US$67.69 per barrel on Friday, up $2.1 from Thursday.

The latest geopolitical risk does not appear to have caused any supply disruption of crude oil or hit the bottom lines of South Korean refiners at the moment, as they have been diversifying oil import sources away from Iran.

But they remain watchful of developments in the region.

n 2018, the U.S. imposed the most biting sanctions ever on Iran following its exit from a 2015 nuclear agreement with Iran and five major world powers.

In May last year, the U.S. ended its sanctions waivers for South Korea, China, India and five other countries for Iranian oil imports, prompting Seoul to diversify its sources of oil imports.

South Korean refiners and chemical firms had relied heavily on Iranian condensate — an ultralight crude oil — to make various petrochemical products thanks to a stable supply and price competitiveness.

Naphtha, a key raw material for petrochemicals, is derived from condensate.

As of November, Saudi Arabia’s crude accounted for a lion’s share of South Korea’s total oil imports at 28.2 percent, followed by Kuwait crude with 14.1 percent, American crude with 12.7 percent, Iraqi crude with 10.9 percent and the United Arab Emirates’ crude oil with 7.8 percent, according to the Korea Petroleum Association. 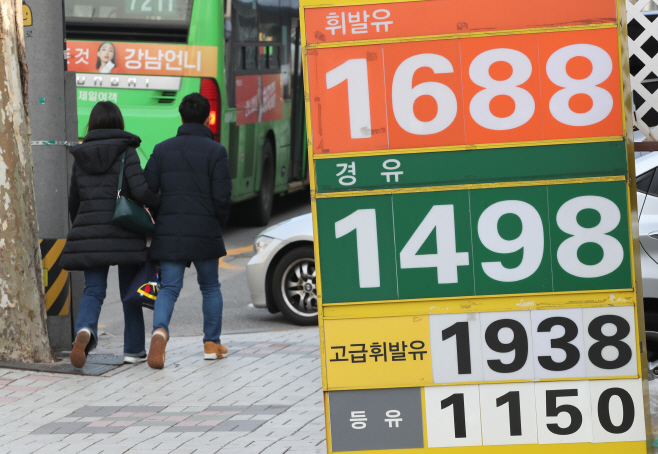 A price sign stands in front of a gas station in Seoul. (Yonhap)

An association official said the fallout from the targeted killing could be limited in terms of effect on crude oil prices, noting oil prices stabilized soon after drone strikes on Saudi Arabia’s crude processing facilities in September last year.

Joo Young-joon, deputy minister for energy and resources at the Ministry of Trade, Industry, and Energy, said South Korea will closely monitor the situation in the Middle East and take swift actions to minimize any fallout on South Korea.

The combined oil reserves held by the South Korean government and local refiners came to 200 million barrels as of 2018.

Still, South Korea did not let its guard down as tensions are brewing in the Middle East.

Later on Monday, Finance Minister Hong Nam-ki presided over a closed-door meeting with top economic and financial officials to assess the possible impact of the tensions on the South Korean economy.

During the meeting, the officials vowed to closely monitor the situation around the clock and roll out countermeasures, if necessary.

The government will consider releasing its oil inventories in case the country faces disruptions in securing crude from the Middle East.

Participants also said South Korea is not facing an immediate interruption of its imports of resources, but the country still need to closely monitor the situations, considering its heavy dependency on the Middle East for energy.

Iran has vowed to retaliate against the U.S. airstrike, a scenario that could lead to a conflict between the U.S. and Iran, which in turn could engulf the region.

One of key concerns is whether Iran will block the Strait of Hormuz, a major oil supply route, including shipments to South Korea, Japan and China.

A shutdown of the Strait of Hormuz would have catastrophic consequences on the world’s economy, as the U.S. killing of Soleimani could lead to higher oil prices and higher freight costs.