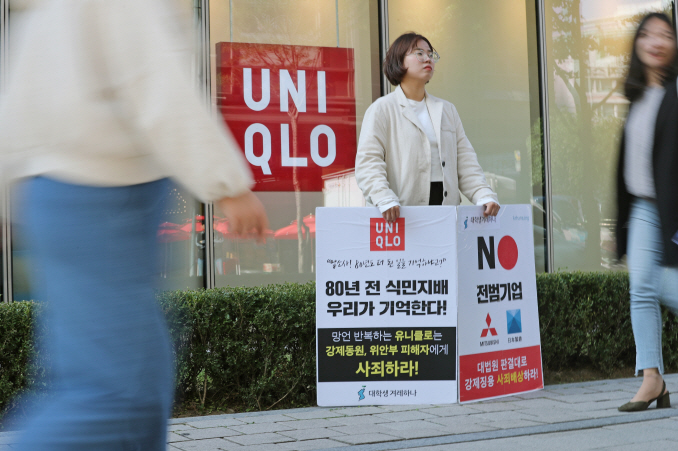 A university student stands with banners criticizing Uniqlo’s controversial TV advertisement in front of a Uniqlo store in Seoul on Oct. 22, 2019. (Yonhap)

SEOUL, Nov. 21 (Korea Bizwire) — Uniqlo has sparked yet another round of controversy by distributing free Heattech shirts as part of a new marketing offensive.

The Japanese apparel company, as part of its 15th Anniversary promotional event, is giving out 100,000 heat-tech shirts on a first come, first served basis to all customers purchasing a product, regardless of the price, at Uniqlo’s offline stores.

Since the promotion can end early if daily quotas are reached, it wasn’t difficult to find people lining up at stores early in the morning, causing an uproar on South Korean social media.

Despite the negative reaction, Uniqlo went on to distribute a press release to promote the giveaway, demonstrating its intention to address the public head-on by turning it into a noise marketing.

South Koreans are increasingly divided over the issue as social figures are joining the debate.

“The number of customers at Uniqlo soared ever since the giveaway, despite the fact they can’t choose the size or color of the shirt,” said Prof. Seo Kyung-duk from Sungshin Women’s University, a Korean PR activist.

“Why do we have to go there, out of all places, to get free clothes?”

In contrast, others implicitly argue that, while they respect one’s own belief, the boycott movement should not be forced on anyone.

The fact that Uniqlo products are being sold out online, while offline stores are empty, shows there is a large population of so-called ‘shy Uniqlo’, ‘shy Japan’ consumers in the country.