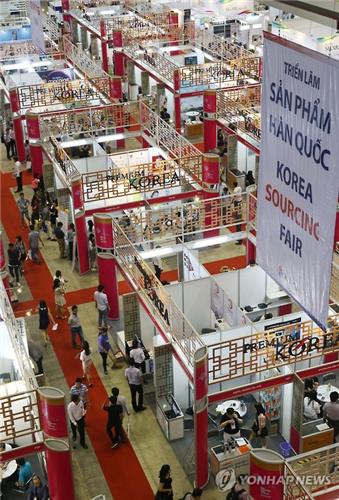 South Korean firms operating in Vietnam have yet to yield profits expected of the amount of investment they have made in the emerging market. (image: Yonhap)

SEOUL, July 20 (Korea Bizwire) — South Korean firms operating in Vietnam have yet to yield profits expected of the amount of investment they have made in the emerging market, a trade report released Wednesday said.

South Korean companies invested an aggregate total of US$15 billion in Vietnam as of the end of last year, the third-largest amount in a foreign country, according to the Korea Trade-investment Promotion Agency (KOTRA). The rate of operating profit was 2.3 percent and net profit 0.6 percent, falling short of the 3.4 percent average for operating income and 2.6 percent for net income among Asian firms doing business in Vietnam.

The report said corporate performance may improve once a mega free trade agreement being negotiated is concluded this year as planned.

The 10 member states of the Association of Southeast Asian Nations plus South Korea, China, Japan, Australia, New Zealand and India are working on the Regional Comprehensive Economic Partnership (RCEP) that would create an economic bloc accounting for half of the world’s population and nearly 30 percent of the global trade and output.

The KOTRA report said the RCEP’s benefit for South Korea is that it can import intermediate goods at a cheaper price from among different countries and export finished products to countries like Vietnam. Such process would create added value for South Korean exporters, the report said.

“Profitability of our companies will improve if they utilize the mega FTA,” Choi Yoon-jeong at KOTRA’s global market strategy office said. “We need to set up a high-core strategy in advancing into Vietnam with the global value chain and the mega FTA in mind.”