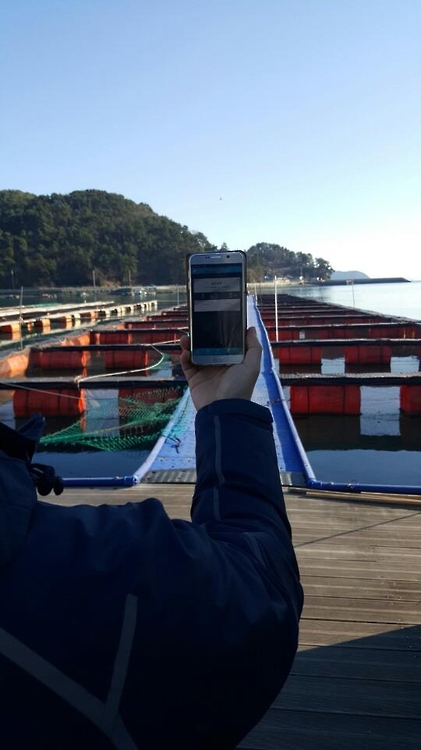 The system’s biggest advantage lies is in its convenience, allowing farm owners to use smartphones to monitor water temperature and dissolved oxygen levels, as well as feeding the animals. (image: Yonhap)

According to the city government, the system was first introduced to local fish farmers in January of this year, and has so far been embraced by 25 aquafarms in the city, with an additional 30 expected to join the venture by April 2017.

The system’s biggest advantage lies is in its convenience, allowing farm owners to use smartphones to monitor water temperature and dissolved oxygen levels, as well as feeding the animals, all of which used to be taken care of by workers physically visiting the aquafarms.

The new system helped significantly reduce the amount of labor usually required in aquaculture, and has help to reduce fish deaths that often result from poor maintenance, officials said.

In addition to remote farm management, owners are also provided with weather and marine disaster information, such as “cold pool” and red tide alerts, and 24-hour CCTV to prevent possible thefts.

“I feel much better,” said Lee, a 42-year-old fisher farmer who has been using the new system. “I can routinely monitor the farm’s condition with my smartphone. I’m no longer physically bound to the site.”

Officials added that a big data analysis of the information gathered from the system will allow them to determine the location of the city’s coastal waters best suited for aquaculture in the future.

“By modernizing and integrating the farms with the latest technology, we plan to better preserve the clean waters of Korea’s southern coastline, and reinforce the safety and the hygiene of marine produce,” a city official said. “It will help us boost Tongyeong’s reputation as Korea’s key fishery city.”