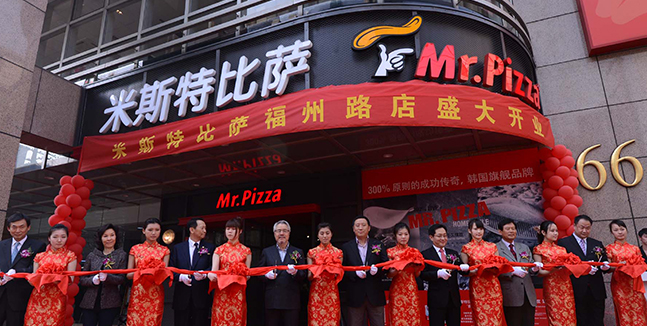 Mr. Pizza now operates 66 restaurants in China, with 38 more already under contract and scheduled to be opened. (image: Mr. Pizza)

MPK Group opened its first Mr. Pizza restaurant in Beijing in 2000. It wasn’t that long ago that the number of Mr. Pizza franchisees increased rapidly in China. At the beginning of 2014, there were only 29 Mr. Pizza restaurants in China. However, the company soon received calls from multiplex shopping centers such as Wanda and Golden Eagle.

Mr. Pizza is also expanding its business in South Asia, having contracted with two local companies to help establish the franchise. MPK Group signed an agreement with WCGC, a large Filipino dining company, in October to open its first Filipino store at Megamall in Manila in April next year.

MPK Group also signed a memorandum of understanding (MOU) with Malaysian conglomerate Ye Chiu in November to establish a joint venture to operate the franchise in Malaysia, Indonesia and Singapore.