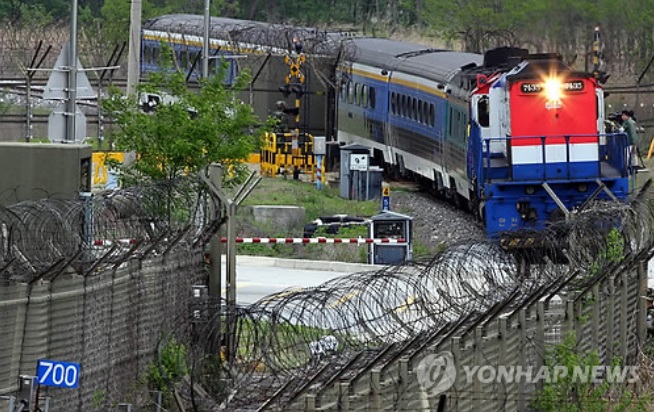 The ministry will constitute a special organization for the two Korea’s successful undertaking of the joint celebration events. (Photo courtesy of Yonhap)

SEOUL, Jan. 21 (Korea Bizwire) – The Korean government is planning to operate a cross-country railroad on the Korean peninsula and develop links to the Trans-Siberian Railroad (TSR), according to a report to President Park Geun-hye from the Ministry of Unification, the Ministry of Foreign Affairs, the Ministry of National Defense and the Ministry of Patriots’ and Veterans’ Affairs on January 19.

The Ministry of Unification said that it will establish two cultural agencies in Seoul and Pyeongyang respectively and test-operate the inter-Korean railroad in celebration of Korea’s 70th anniversary of independence from Japanese occupation. The ministry will constitute a special organization for the two Korea’s successful undertaking of the joint celebration events. For starters, the two Korean governments will test-operate a railroad with a route from Seoul in South Korea to Sinuiju and Najin in North Korea.

Ryoo Kihl-jae, Minister of Unification, said that the Gyeongui Line, a 518.5 kilometer long railroad from Seoul to Sinuiju, has been established for a long time, and it can be activated easily with consent from the North Korean government. The South Korean Government is also planning to link the railroad to the TSR.

The Ministry of Unification is also committed to the internationalization of the Gaeseong Industrial Complex in North Korea and expanding the distribution industry of Najin and Hasan where the “Najin-Hasan project” initiated by North Korea and Russia in 2008 and affiliated with South Korea in 2013 is to be undertaken to modernize the Najin-Hasan railway.

South Korea is planning to boost the distribution industry of Najin and Hasan while benefiting from South Korea companies’ exports to Europe via the Najin Shipway and the Russian railway. The South Korean government is planning to launch more projects to enhance infrastructure across the peninsula.