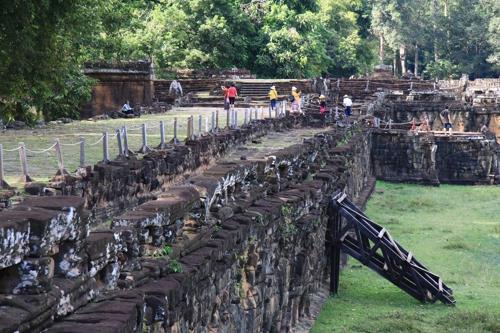 Terrace of the Elephants inside an ancient city of Angkor Thom. (image: Chico Korea)

Chico Korea said the group will work with the Apsara Authority, which manages the Angkor Archaeological Park in Siem Reap, to restore and preserve the Terrace of the Elephants inside the ancient city of Angkor Thom.

In November, the Korean organization signed a memorandum of understanding with Apsara to work together for three years to restore the historic site and to train people for such work.

The terrace, 3.5 meters in height and 330 meters in length, is believed to have been built in the late 12th century, and to have been used by Angkor’s king Jayavarman VII, who stood there to welcome his army as it returned from battle.

Despite several maintenance works in the past, the terrace’s wobbly structure is believed to still need reinforcing.

Choi Byung-ha, director of Chico Korea, said the group will apply Korea’s advanced maintenance skills, especially in the field of ancient stone structures, to the project.

“We will, first of all, carefully study the overall condition of the terrace until the first half of next year,” he said. “We also would like to share our expertise with young Cambodians who participate in the restoration project.”