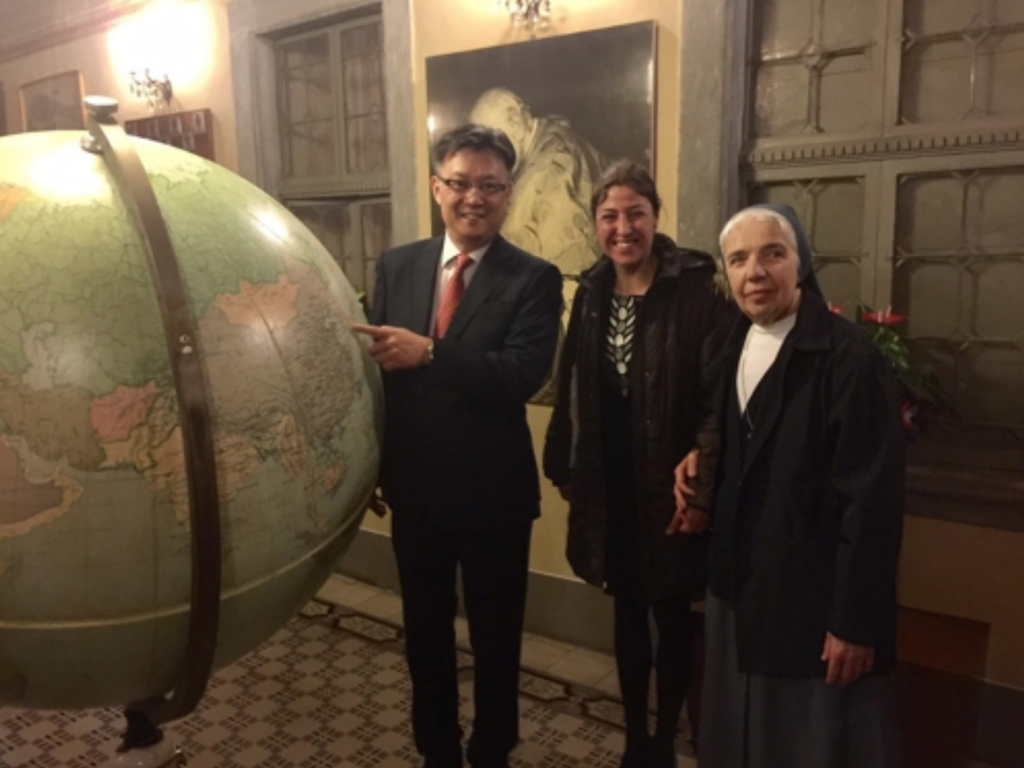 South Korean Consul General in Milan Chang Jae-bok (L) and art conservationist Nella Poggi, attend a press conference at the town hall of Sotto il Monte Giovanni Ventitre near Italy’s Bergamo on April 28, 2017, to mark the completion of the restoration of a globe at a museum dedicated to Pope John XXIII by using the Korean traditional paper “hanji.” (image: Yonhap)

ROME, May 2 (Korea Bizwire) – A team of Italian experts has succeeded in the restoration of a globe at a museum dedicated to Pope John XXIII by using the Korean traditional paper “hanji” after one year of work, the South Korean consulate general in Milan said Sunday.

The team, led by art conservationist Nella Poggi, South Korean Consul General Chang Jae-bok and representatives of a foundation on the late pontiff attended a press conference at the town hall of Sotto il Monte Giovanni Ventitre near located near Italy’s Bergamo on Friday to mark the completion of the restoration of the globe, a cultural asset of the Vatican City.

It is estimated to have a significant meaning in the history of the Catholic Church as it has a complete map of all the dioceses of the church in the world at the beginning of the 1960s as well as places where the pontiff went on pilgrimages.

During the press conference, restorer Poggi was quoted as saying his work was not easy because the globe was badly damaged as more than a half century passed since it was made and had the shape of a sphere.

But Poggi said the good tension held by hanji helped him carry out the work, the South Korean diplomatic mission said.

Consul General Chang expressed his pleasure over the restoration of the artifact loved by Pope John XXIII through hanji, a typical Korean cultural asset.

He hoped that “South Korea and Italy will enhance their relations by cooperating in the utilization of cultural assets.”

Since 2014, the South Korean consulate general has carried out a project to have art restorers in Italy and other parts of Europe where Japanese paper has been the overwhelming choice of art conservation, know about the superiority of hanji.

The museum in the Italian town, the hometown of Pope John XXIII, plans to unveil the restored globe to the public soon.

The studio’s paper was also used in a work to the Chartula, one of the most beloved items of Italian cultural heritage. The Chartula is a handwritten prayer on parchment by St. Francis of Assisi (1182~1226), a Roman Catholic saint and one of the patron saints of Italy, in 1224.