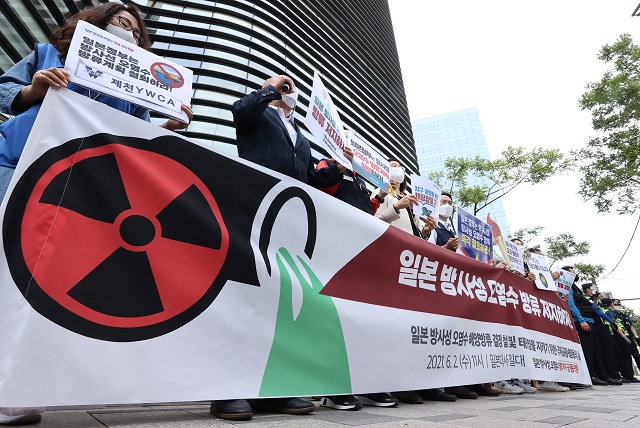 Activists hold a rally protesting Japan’s plan to release radioactive water from its Fukushima nuclear power plant into the Pacific Ocean, in front of the Japanese Embassy in Seoul on June 2, 2021. (Yonhap)

Kim Hong-suk, a nuclear expert from the Korea Institute of Nuclear Safety (KINS), joined the team that the International Atomic Energy Agency (IAEA) formed Thursday, it said, noting his participation will help ensure the safety of the planned water release.

The team is known to comprise experts from 11 countries, including the United States, France and China.

In April, Japan finalized its plans to start discharging the radioactive water into the sea in 2023 in what is expected to be a decadeslong process, as all storage tanks at the Fukushima plant are expected to be full as early as the fall of 2022.

“The participation of our expert carries great meaning, as we have secured the minimum necessary safety mechanism that we can have to protect the safety of our citizens through direct and indirect verifications should Japan push ahead with the planned discharge of the Fukushima nuclear plant water,” the government said in a press release.

The government reiterated its “top priority” on the health and safety of citizens, stressing that it “would not compromise on any measure that could harm the health of citizens.”

The inclusion of the Korean researcher came as Seoul has called for “acceptable, scientific and objective” monitoring efforts related to the issue amid concerns that the discharge could affect the safety of neighboring countries and the marine environment.

On Thursday, the IAEA and Japan signed the terms of reference outlining the scope of the IAEA’s technical assistance in monitoring and reviewing the planned discharge of the water stored at the Fukushima Daiichi Nuclear Power Station.

The IAEA’s involvement before, during and after the water disposal will provide confidence that it takes place in line with the international safety standards, which aim to protect people and the environment, the IAEA said.