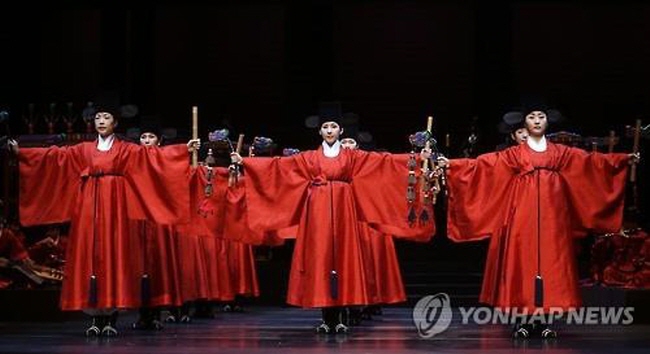 Members of national troupes perform royal ancestral ritual music during a rehearsal held at a theater of the National Gugak Center in Seoul on June 11, 2015. (image: Yonhap)

Jongmyo Jeryeak was designated to open a series of events celebrating the 130th anniversary of diplomatic relations between Korea and France on Sept. 18-19.

“Jongmyo Jeryeak is a composite art that has the essence of all traditional Korean arts,” Kim Hae-sook, director of the National Gugak Center, said during a press conference to promote the opening performance. “We will present the performance of Jongmyo Jeryeak on the largest-ever scale in France, the center of European performing arts, so as to utilize it as a chance to let the world know of high-class Korean culture.”

The music which Joseon Dynasty (1392-1910) kings used in ancestral memorial ceremonies at Jongmyo Shrine in downtown Seoul became the first Korean item on UNESCO’s list of intangible world heritage along with the ancestral ritual in 2001.

South Korea and France agreed in 2010 to designate the period between the latter part of 2015 to the end of 2016 as “Years 2015-2016 of Korea-France Bilateral Exchanges” under which more than 100 cultural programs will be held in both countries to allow the two peoples to experience each other’s culture without having to travel.

The performance of Jongmyo Jeryeak at the Theatre National de Chaillot in Paris was also designated as the theater’s 2015-2016 season opener. It will be performed at the 1,200-seat theater before paid audiences.

The government office working to promote traditional Korean music and dance said it will play the ritual music in full length employing 120 people, including 50 instrumental players and 35 dancers.

This will be the first time that the music is performed in full out of South Korea, although a brief version of it was staged in Japan in 2000 and Italy and Germany in 2007.

“Organizing committees of both countries agreed on the view that Jongmyo Jeryeak deserves to be the opener in that it doesn’t exist in any other countries in the world and is a masterpiece that is not inferior to those in other countries and that it is rare that a musical work is kept and handed down for such a long period in a nation,” said Choe Jun-ho, music director of the South Korean organizing committee for the Years.

The performance in Paris will be followed by various concerts of traditional Korean music in major European cities such as Berlin, Madrid and Budapest this fall, Kim said.

“With this performance as an occasion, we’ll exert efforts to enhance the quality and status of traditional Korean music and make the music popular globally by advancing to more overseas markets,” she added.’