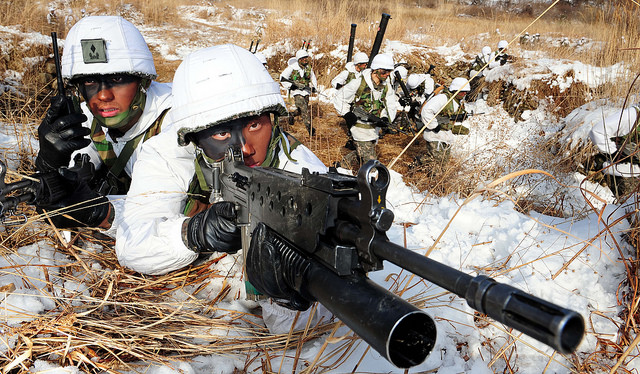 For Korean soldiers, the service term is on the average level, but they are being paid less than the counterparts in other countries. (image: ROK Armed Forces/flickr)

SEOUL, Aug. 19 (Korea Bizwire) — Amid the common bullying and violence among peer Korean soldiers, they are even more suffering from being unreasonably underpaid, compared with the soldiers in other countries introducing compulsory military services.

Their service term on average is 21 months, which is almost the same as in the Korean army. North Korea enforces the longest service period of 10 years for a man and 7 years for a woman. Also, Israeli soldiers serve the military for a rather long period of 3 years for men and 2 years for women.

For Korean soldiers, the service term is on the average level, but they are being paid less than the counterparts in other countries. Among the five countries the MMA could secure their military payroll information from, Singapore pays 393,000 won (US$386) for a private, 409,000 won for a first class private, 450,000 won for a corporal and 483,000 won for a sergeant monthly. Thai’s conscripted soldiers receive an average 288,000 won a month. Considering the fact that a Korean army corporate is receiving 134,600 won a month, Korean soldiers are being paid 30-50 percent less than those from other countries.

Meanwhile, the Ministry of National Defense of Korea plans to raise their wages by 15 percent annually to 195,000 won in 2017.