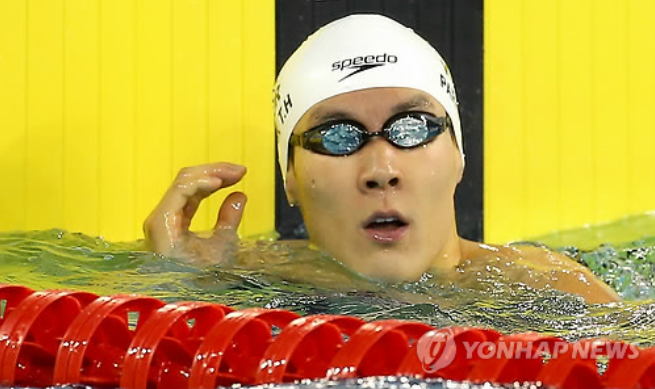 Team GMP argued on Monday that a doctor injected Park with a banned substance after giving repeated assurances that the shot would be clean. The agency said Park didn’t fail multiple doping tests during the Asian Games. (image courtesy of Yonhap)

The news of Park’s positive test emerged Monday, and his Seoul-based agency Team GMP, while confirming the result, blamed it on an injection given by a local hospital.

The Korea Swimming Federation (KSF) said Tuesday that Park had actually failed a test administered by FINA, the international swimming governing body, rather than the World Anti-Doping Agency (WADA), as was first reported.

The KSF added that Park was tested ahead of the Asian Games in the South Korean city of Incheon, which opened in September, and was notified of the result in December. The substance for which Park tested positive hasn’t been identified.

According a WADA official, Park will have to attend a FINA hearing to explain his situation.

“A world-class swimmer like Park is tested frequently out of competition,” the official said of the four-time Olympic medalist and two-time world champion. “The severity of his penalty will be determined after his hearing.”

Team GMP argued on Monday that a doctor injected Park with a banned substance after giving repeated assurances that the shot would be clean. The agency said Park didn’t fail multiple doping tests during the Asian Games.

Team GMP also said it would try to hold the hospital civilly and criminally liable for its action.

At the 2008 Beijing Games, Park became the first South Korean to win an Olympic swimming gold medal when he took the men’s 400-meter freestyle race. He added a silver in the 200ｍ freestyle.

Park is the most decorated South Korean in Asian Games history with 20 medals, including six gold medals.