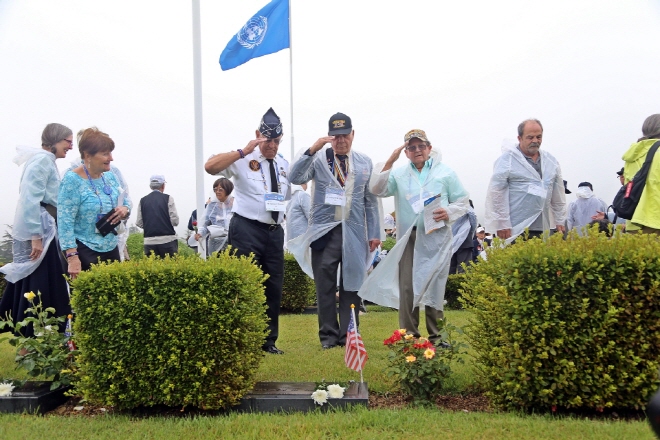 Korean War veterans from abroad pay tribute at the graves of deceased fellow soldiers at the U.N. Memorial Cemetery in Busan on June 26, 2018. (image: Ministry of Patriots and Veterans Affairs)

SEOUL, Jul. 22 (Korea Bizwire) — A group of international soldiers who fought in the 1950-53 Korean War under the U.N. flag will visit South Korea this week as part of a program to express appreciation for their service, Seoul’s veterans ministry said Monday.

A total of 107 war veterans and their family members from 16 countries, including the United States and Australia, are scheduled to make a six-day trip starting Tuesday, according to the Ministry of Patriots and Veterans Affairs.

During the visit, they plan to tour major security sites, including the truce village of Panmunjom and the U.N. Memorial Cemetery in Busan, as well as attending related ceremonies, the ministry added.

“The trip, which is to mark the U.N. Forces Participation Day in the Korean War, is to express our gratitude for their commitment and sacrifice,” the ministry said in a release.

South Korea marks the participation of the U.N. forces in the war on July 27, the day in 1953 an armistice agreement was signed to halt the three-year conflict.

During the Korean War, nearly 2 million U.N. soldiers and more than 3,000 medics were sent to the Korean Peninsula to fight invading North Korean and Chinese soldiers, according to South Korean government data.