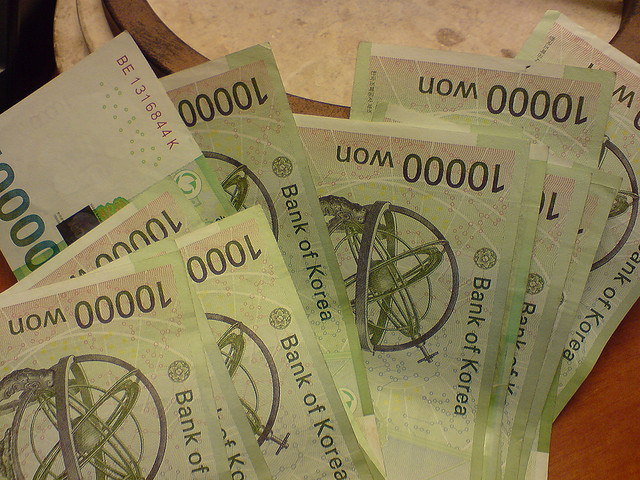 According to the data by Statistics Korea, transfer spending that includes cash given as wedding and condolence gifts fell in the first quarter after backtracking in the October-December period. (image: Karl Baron/flickr)

According to the data by Statistics Korea, transfer spending that includes cash given as wedding and condolence gifts fell in the first quarter after backtracking in the October-December period.

In the first three months of 2015, outlays dipped 0.3 percent on-year, with spending falling 5.8 percent in the previous quarter.

Transfer spending dropped the steepest among the self-employed, with salaried workers being less affected. Outlays by self-employed people were down 2.4 percent in the first quarter, effectively dragging down spending into minus territory as a whole.

Spending among the top 20 percent of income earners fell at the sharpest rate of 12.3 percent in the fourth quarter, while the bottom 20 percent was off 6.2 percent.

The downtrend continued in the first quarter with the top fifth slashing transfer spending by 5.9 percent, while people in the bottom 20 percent range jacked up outlays by 4.9 percent.

“There was a drop in the numbers of people getting married and those passing away in the fourth quarter that can account for the decline late last year, but the number of couples tying the knot and deaths rose early this year, which is a clear indication that many are giving away less,” an observer said.

The data also showed donations made to non-profit charity organizations fell 1.3 percent on-year in the first quarter. The drop comes after a 3.2 percent decline in the fourth quarter, another sign that people are tightening their purse springs.

In April, the Bank of Korea, the nation’s central bank, cut its growth forecast for this year to 3.1 percent from an earlier 3.4 percent estimate.