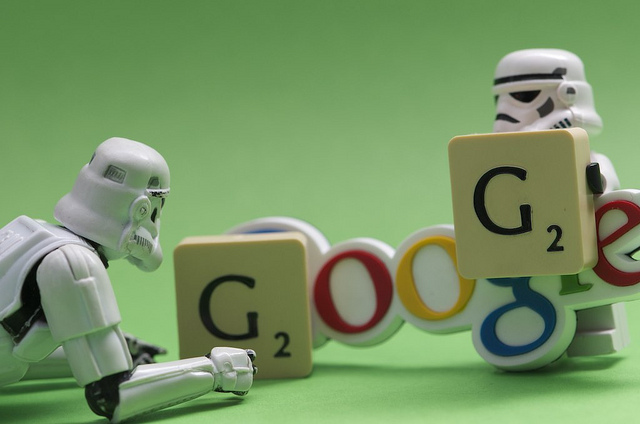 Given the market share of the Android operating system is 93.4 percent in Korea, Google’s proportion in the content market is projected to swell up further as time goes by. (image: Kalexanderson/flickr)

According to the Korea Mobile Internet Business Association, the size of last year’s mobile content market was 2,433.5 billion won, in which Google Play took up 49.1 percent, or 1.19 trillion won, and Apple’s App Store accounts for 30.5 percent, which is equivalent to 740 billion won. Google and Apple together hold a whopping 79.6 percent share of the total mobile content market.

In contrast, homegrown services such as T Store of SK Planet, Olleh Market of KT, Uplus Store of LG Uplus, Samsung Apps of Samsung Electronics, LG Smart World of LG Electronics, and Naver App Store of Naver accounted for only 12.4 percent of the market in all. The association predicted the market to be around 3.19 trillion won at the end of this year, about a 30 percent increase from last year’s, which means that Google and Apple will take home 2.5 trillion won from the market if the last year’s market share remains unchanged.

Given the market share of the Android operating system is 93.4 percent in Korea, Google’s proportion in the content market is projected to swell up further as time goes by. Analysts suggested several reasons as to why competition is unfair for domestic app stores on Android-based devices as follows:

Such unfair competition practices account for an unpromising outlook for domestic mobile software app markets. Domestic app market service providers contended that the user’s right to choose services offered on the market must not be violated and the diversity of market service must be encouraged.

An official in the industry said, “The user’s options have practically disappeared as the global giants that carry their own operating systems force consumers to use their own software products based on dominant market power.”

An app developer also said, “In the case of China that has started to lead the global Internet market recently has created a unique app store market where hundreds of domestic app download platforms are competing freely by not embedding Google Play in Android phones.”