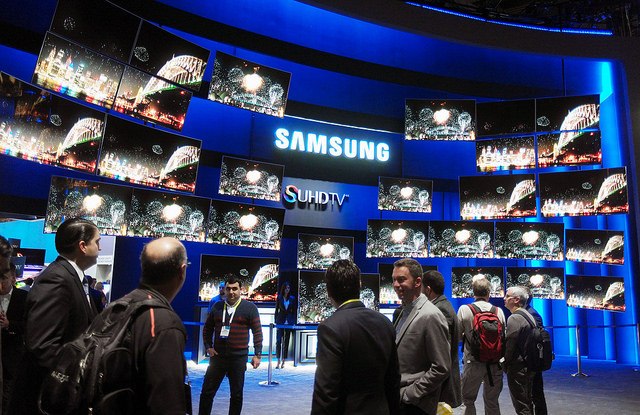 The combined net profits of Samsung and Hyundai accounted for 81 percent of the total earnings logged by the top 30 groups last year, a sharp rise from 47.5 percent in 2010. (image: Samsung Electronics)

SEOUL, April 20 (Korea Bizwire) – Korea’s two largest business groups, Samsung Group and Hyundai Motor Group, accounted for a significant portion of the net profits of the top 30 groups in Korea, by generating more than four fifths of their total earnings.

Korea generally categorizes the top 30 business groups as representing the Korean economy, but their earnings too concentrated on the top two business groups, known in Korean as chaebol. What’s worse is that their profit concentration is deepening as years go by.

According to CEO Score, a research firm that tracks conglomerates, Samsung and Hyundai posted a combined net profit of 33.6 trillion won (US$31 billion) in 2014, about 4 trillion won lower than in 2010. However, the earnings of the other 28 groups nosedived to 8 trillion won in 2014, a 34 trillion won fall from 2010.

As a result, the combined net profits of Samsung and Hyundai accounted for 81 percent of the total earnings logged by the top 30 groups last year, a sharp rise from 47.5 percent in 2010.

Samsung and Hyundai’s portion of the total earnings of the top 30 groups was less than 50 percent as of 2011 with 49.2 percent, however, it increased by 9.1 percent in 2012 and rose 6 percent point annually.

Their rise in dominance can be blamed on the free fall of other groups’ net profits.