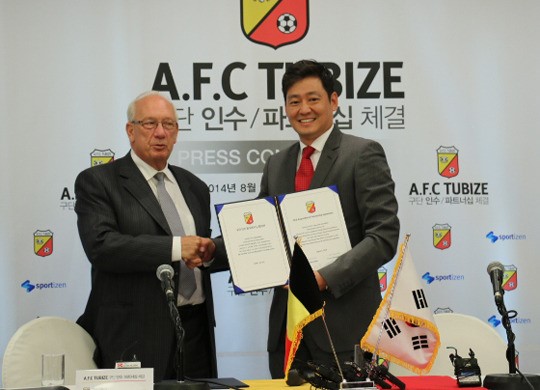 “We want to make the AFC Tubize a stepping stone for young talented Korean players to advance into major leagues in Europe. We also want to help the AFC Tubize see it enter the first division and ultimately, to compete in the UEFA Europa competition.” (image: Sportizen)

SEOUL, Aug. 6 (Korea Bizwire) — For the first time as a Korean company, Sportizen acquired a professional soccer club in Europe. The news excited soccer fans of Korea who can’t wait to see the club working as a platform for young Korean players to take their chance in Europe.

Sportizen, Korea’s sports marketing firm, announced that it has acquired the AFC Tubize of the Belgacom League, Belgian soccer league’s second highest division, in its press conference held on August 4. The AFC Tubize is a soccer club famous for the team in which Belgium and the world’s superstar Eden Hazard (Chelsea) played in his youth.

The Belgian soccer club is based in the city of Tubize, the steel industry city of Belgium located in the 25-kilometer outskirts of the nation’s capital Brussels, has been usually placed in the second division, since the team first made it to the premier division for the first time in the team’s history in 2008 and was relegated back in the following season. The AFC Tubize finished at the sixth place in the last season.

For its geographical advantage and not subject to the foreign player quota rule, the Belgian soccer league have served as a bridgehead for non-European soccer hopefuls to top leagues in Europe, such as the Premier League of England, the Bundesliga of Germany and the La Liga of Spain.

In the press conference, the company revealed its plan in operating the club, which included the signing of several young talented Korean players and turning the club into a bigger one. Shim Jae-Chun, the CEO of Sportizen, said, “We want to make the AFC Tubize a stepping stone for young talented Korean players to advance into major leagues in Europe. We also want to help the AFC Tubize see it enter the first division and ultimately, to compete in the UEFA Europa competition.”

The Korean company that acquired the team is a sports marketing firm with a history of hosting various small and large sporting events including basketball, golf, and ski competitions. The main businesses of the firm are general business consulting regarding athlete representation, sports event management and sponsorship management, and consulting corporate customers for their sports marketing strategy.

On the other hand, upon the acquisition, both Belgian and Korean national flags will be put on the official uniform of the soccer club from this season. An official in Sportizen said, “The players have been wearing the Korean flag on their uniform since the opening game of this season last week.”