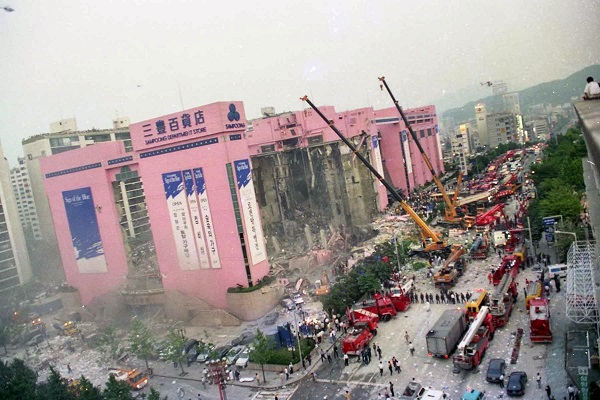 The disaster was due to corruption in the construction process. (image: Wikimedia)

SEOUL, Oct. 12 (Korea Bizwire) — On June 29, 1995, Sampoong Department Store, one of the luxury department stores in South Korea, located in Seoul’s Gangnam, collapsed from the top to the fourth basement level within only 20 seconds.

It was the deadliest building collapse and one of the most fatal disasters in Korean history. A total of 502 people died and 937 were injured, many of whom were reportedly housewives who were doing grocery shopping to prepare dinner.

The disaster was due to corruption in the construction process. On the day, as an increasing number of cracks appeared, a building manager insisted on closing the store. Executives, however, refused to do it and ordered the manager to keep it open. They left the building as a precaution but left all customers behind without any evacuation orders.

The Seoul Foundation for Arts and Culture plans to collect memories of the Sampoong disaster as part of a project to record historical events of Seoul. Through the memories from those who experienced the calamity, the foundation will make an opportunity to look back upon the past 20 years, and observe how Seoul and Korean society have dealt with those events and treated pains in them.

The project this year, which started in 2013, will talk about “memory, joy and pain.” In terms of memory, it will show the history of the Dongdaemun Stadium, which is now transformed into an ultra-modern structure called Dongdaemun Design Plaza.

When it comes to joy, the story of the 2002 FIFA World Cup Korea/Japan is going to be displayed. The Sampoong Department Store collapse is planned to be a theme of the heartbreaking memory of Seoul. 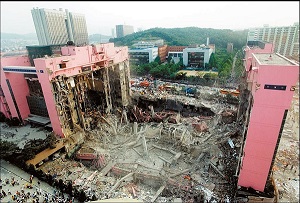 Sampoong Department Store collapsed from the top to the fourth basement level within only 20 seconds. (image:Wikimedia)

The art foundation has collected data from survivors, witnesses and rescuers since September. One of survivors is Park Seung-hyun, a 19-year-old last survivor at that time, who held out for 377 hours under the debris.

Actor Jeong Dong-nam is one of the rescuers, who always stands on the front line of catastrophic events from the Sampoong collapse to the six-month-old Sewol ferry disaster. In the data, there is also the dark side of the incident including fierce competition in media coverage.

The foundation launched a memory-collector group consisting of 15 citizens including writers, translators and artists in June to collect the memories. The group visited people related to the incident and recorded their eyewitness accounts. The collected information can be browsed at the Seoul Metropolitan Library and on the foundation’s website.

“Our team tried our best to record precious but forgotten memories. We also listened to their pains and how they overcame them,” Choi Eun-young, a children’s book author and member of the reporter group, said.

Anyone who has experiences related to the collapse is welcomed to share their memories. Those who were on the site, who were injured, who took part in rescue operations, who lost their family members on the day and who reported the disaster can help the project.

People who want to share their memories or further information can visit the website (www.sfac.ro.kr/memoryinseoul) or make a phone call at 02-3290-7123.