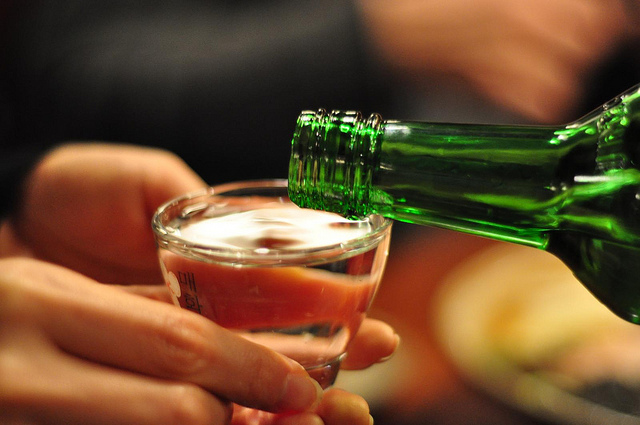 According to the Korea Alcohol & Liquor Industry Association on June 19, the total domestic consumption of alcohol in 2012 was 3.12 million kiloliters.(image:grahamhills/flickr) 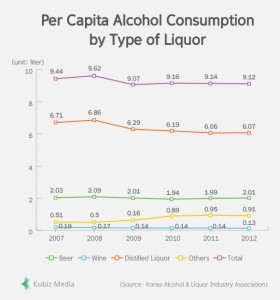 According to the Korea Alcohol & Liquor Industry Association on June 19, the total domestic consumption of alcohol in 2012 was 3.12 million kiloliters (1 kiloliter equals 1,000 liters). The figure included unofficial consumption from alcoholic beverages brought in individually from overseas, as well as official shipments.

For adults older than 15 years of age, this is equivalent to 9.16 liters of alcohol per person. The per-capita alcoholic beverage consumption has been in a downward trend since 2007 when the figure was 9.48 liters. By taking into account the alcohol content, an average of 101 bottles of beer and 63 bottles of soju was gulped down by a Korean adult.

The association commented, “Given Korea’s drinking culture of encouraging drinking with each other in public places such as restaurants where a significant amount of alcohol is wasted, per-capita alcohol consumption must be much lower than 9.16 liters.”

According to a report published last year by the Organization for Economic Cooperation & Development, the average alcohol consumption per person in Korea over 15 years of age was 8.9 liters, 22nd highest among the 34 OECD member countries. The average per-person alcohol consumption for the whole 34 member nations was 9.4 liters, slightly higher than that for Koreans.