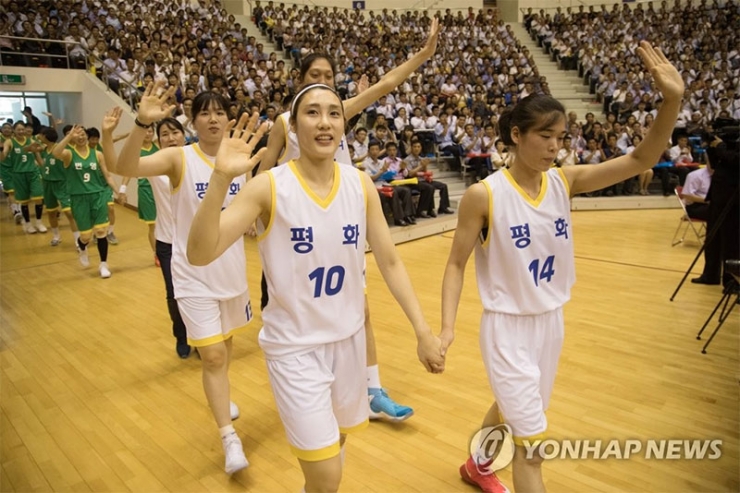 SEOUL, Jul. 17 (Korea Bizwire) — South Korea and North Korea will try to continue their peacemaking mood through sport by sending joint teams to the 2018 Asian Games in Indonesia.

The Koreas agreed to field joint teams in three sports — basketball, canoeing, and rowing — at this year’s Jakarta-Palembang Asian Games, which will be held from Aug. 18 to Sept. 2. They will join forces in the women’s five-on-five basketball; men’s and women’s dragon boat, a canoe discipline; and the lightweight coxless men’s four, lightweight men’s eight and lightweight women’s double sculls events in rowing.

The South and the North evaluated their women’s basketball players at a friendly event in Pyongyang earlier this month, where they also shared their thoughts on the joint team. Seoul’s Korea Basketball Association (KBA) then requested North Korea send Ro Suk-yong, Jang Mi-kong and Ri Jong-ok for the unified team.

For the women’s basketball competition at the Asian Games, each team must name a 12-player roster. It is likely that South Korea will put nine of their players on the roster.

“We recently sent a list of three North Korean players we want for the joint team,” a KBA official said. “It’s unclear at this point whether the North will send those three players. Once North Korean players visit the South, we’ll train with them together at the National Training Center in Jincheon, North Chungcheong Province.”

The two sides also have yet to reach agreement on when the North Korean players will join the South-dominated team. If the North’s athletes come before July 25, then the unified Korean team can compete at the 40th William Jones Cup, a friendly basketball tournament, in Chinese Taipei to improve their teamwork.

As for the coaching staff — one head coach and two assistants — it is likely that the South’s Lee Moon-kyu would serve as the boss, with a North Korean as his assistant.

They’ll compete under the unified Korean flag and the traditional folk song “Arirang” will played as their anthem.

For dragon boat racing, there will be eight athletes each for the men’s and women’s events, and the Koreas are expected to have the same number of canoeists. South Korea has already completed its selection for the dragon boat racing team.

The sport not only needs paddlers, but also a drummer and a sweep, who steers the dragon boat. Drummers and sweeps can be male or female.

The South’s dragon boat team had training in Hwacheon, Gangwon Province, last week. It plans to conduct joint training with North Koreans south of the border once Pyongyang sends its canoeists.

Dragon boat racing was included as a medal sport at the Asian Games in 2010. For this year’s edition, five gold medals are up for grabs — the men’s 200 meters, 500m and 1,000m, and the women’s 200m and 500m — and officials believe there is a good chance that the joint team will have a podium finish.

South Korea won a bronze medal in this discipline at the 2010 Asian Games even though it had no professional dragon boaters.

The South’s national rowing team are currently training at Chungju Tangeum Lake Rowing Center in North Chungcheong Province. It is expected that they’ll train with North Koreans at the same location before going to the Asian Games.