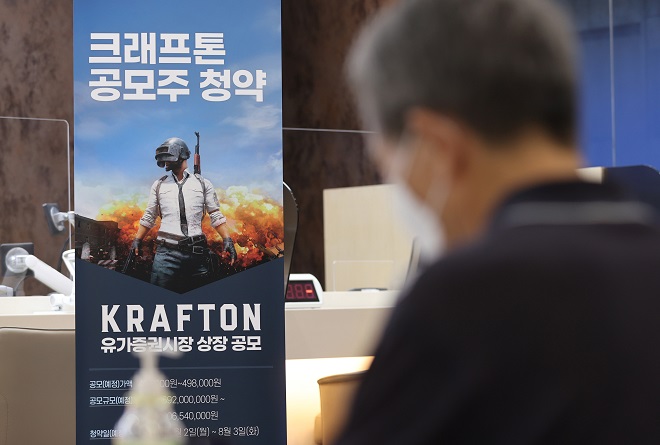 A retail investor waits to submit his subscription at Krafton Inc.’s IPO event held at a local brokerage in central Seoul on Aug. 2, 2021. (Yonhap)

During the two-day subscription, the subscription rate stood at 7.79:1 for shares allocated for retail investors.

The developer behind the global hit “PlayerUnknown’s Battlegrounds” (PUBG) is set to go public on Aug. 10.

The gaming label lowered its IPO pricing band to between 400,000 won and 498,000 won, from the previous 458,000 won-557,000 won range, as financial authorities requested revisions to its plan amid overvaluation concerns.

The IPO price places Krafton’s valuation at 24.3 trillion won, trumping the market caps of video game compatriots, such as NCSOFT Corp. at 18.4 trillion won and Netmarble Corp. at 12.2 trillion won.

Krafton’s listing is expected to be one of the largest ever on the local bourse. Samsung Life Insurance Co. holds the record for its 4.89 trillion-won IPO in 2010.

The company is looking to expand its video game portfolio with the launch of the new in-house mobile game “PUBG: New State” as early as September this year and the horror game “Callisto Protocol” next year.