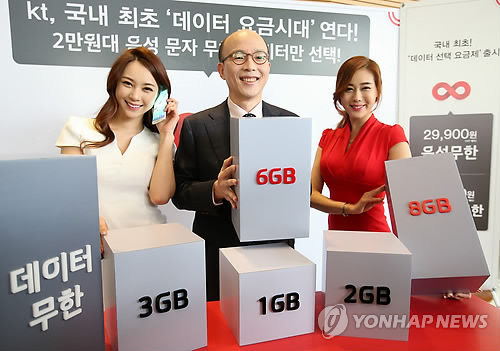 With KT’s new plan, users can talk and text as much as they want, and choose a data plan that suits their preferences. (image: KT)

SEOUL, May 9 (Korea Bizwire) — As Koreans increasingly use their cell phones for data rather than making phone calls and texting, KT launched a new service that provides LTE data at price points from 20,000 won to 50,000 won, including unlimited talking and texting.

Mobile phone rates in Korea are usually proportional to voice minutes and data together. Thus, professionals who talk a lot but only need small quantities of data always had to use high price plans. Individuals who barely use their phones for talking and texting and whose data usage is high also waste a good amount of money on talk and text plans.

With KT’s new plan, users can talk and text as much as they want, and choose a data plan that suits their preferences. KT’s plan not only lets customers roll data over into the next month, but also allows them to “borrow” data from the next month.

KT Vice President Nam Gyu-taek said at a press conference on May 7 that even 10 years ago, 80 percent of Koreans’ phone use was for talking, while 60 to 70 percent is for data nowadays. He said that the demand for simpler plans centered on data usage is emerging globally.

As KT introduced the new plan, SK Telecom and LG Uplus are also planning to introduce new data-centric plans. LG Uplus will present a similar plan next week, while SK Telecom is currently evaluating its options.