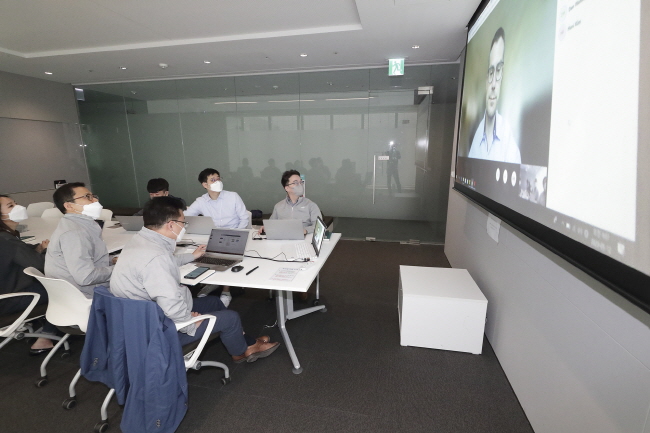 This photo provided by KT Corp. on May 17, 2020, shows the company’s officials in Seoul holding a videoconference with an official from the Bill & Melinda Gates Foundation.

A South Korean consortium led by KT will carry out the project named “A Next Generation Surveillance Study for Epidemic Preparedness,” with the Bill & Melinda Gates Foundation, one of the world’s largest private foundations, investing 12 billion won (US$9.7 million) over the next three years, according to the company.

KT said it has formed the consortium with infectious disease experts, medical service tech developers and the Korea Institute of Science and Technology Information.

In the project, KT will focus on developing a mobile application that can help with early detection of infectious disease using artificial intelligence-based data analysis.

It aims to develop an epidemiological model that can predict the spread of infectious diseases.

KT said the project will contribute to quick responses to new epidemic diseases in the future and will be able to upgrade South Korea’s quarantine system.