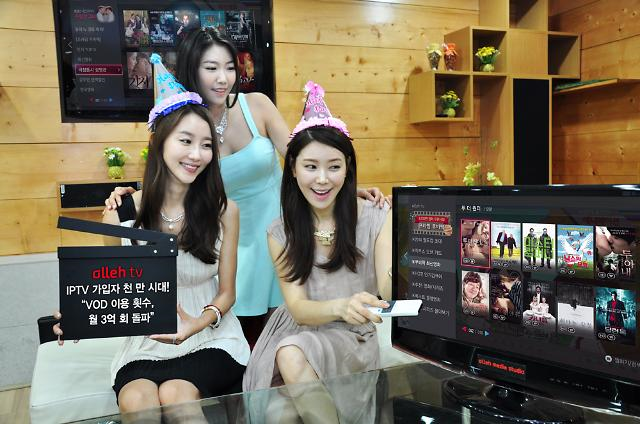 The company expected that a total number of the yearly VOD views would reach 3.5 billion ones by end of the year. (image: KT)

KT announced on September 15 that the number of VOD transactions for its Olleh TV hit the 300 million marks in last August alone — the largest monthly figure for its popular IPTV service. The company expected that a total number of the yearly VOD views would reach 3.5 billion ones by end of the year.

According to the telecom service provider, seven in ten service users, or about 69 percent, watched the first VOD within a week after they became a member of VOD users while nine in ten, or about 88 percent, used the service within a month.

In addition, 76 percent of the first users were likely to make use of the TV show replay service because users seemed to be more familiar with TV shows than films and documentaries, delivering a meaningful insight into behavioral trends in the IPTV service market.

The number of paid VOD views has increased to 19 percent in 2014 from 7 percent in 2012 among the total number of VOD subscriptions. One in ten subscribers used the pay per view (PPV) service within a week right after joining the service while three in ten watched a paid VOD within a month.

“Sixty one percent of all viewers bought a charged VOD within a year, which means that the PPV service is now common to all users,” an official of the service company said.