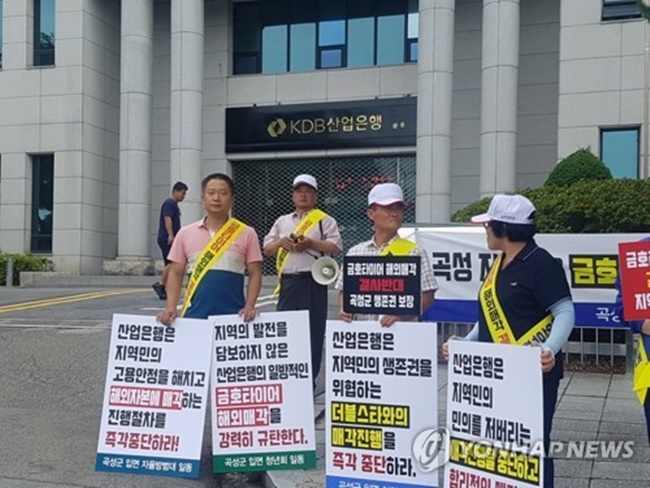 In this photo, taken on July 17, 2017, social activists from Gokseong, South Jeolla Province, stage a rally against the sale of Kumho Tire to Qingdao Doublestar in front of a KDB outlet in Gwangju, 329 kilometers southwest of Seoul. Kumho Tire has three domestic plants — two in the South Jeolla Province and one in Pyeongtaek, Gyeonggi Province. (Image: Yonhap)

SEOUL, July 18 (Korea Bizwire) – The board of Kumho Industrial Co. on Tuesday offered to allow Qingdao Doublestar Co. the use of South Korea’s No. 2 tiremaker’s name for 12 and a half years as part of ongoing negotiations to finalize the sale of the company.

Kumho Industrial holds the right to the brand name of the local tiremaker. Qingdao Doublestar signed a deal early this year to acquire the South Korean tiremaker, but there have been many snags holding up talks.

In a board meeting held earlier in the day, Kumho Industrial asked for royalties equal to 0.5 percent of tire sales for the duration of the obligatory brand usage period.

The Chinese company wants to use the Kumho name for five years and then decide whether to continue using it for the next 15 years depending on market conditions, Cho Seong-wook, a spokesman at the state-run Korea Development Bank (KDB), said over the phone.

As for Kumho Industrial’s offers involving the brand usage years and fees, the KDB said it will “immediately enter into consultations with eight other creditors and Qingdao Doublestar to decide on whether to accept them or not.”

It requires the creditors and the Chinese company to revise the share purchase agremeent they signed earlier this year to accept the offers, the KDB said.

In March, Qingdao Doublestar signed a 955 billion won deal to acquire the stake, which will help it turn into China’s biggest tiremaker.

Since the signing, Kumho Tire’s creditors and Qingdao Doublestar have mainly discussed the use of the brand name, extension of debt maturing date and Seoul’s approval of the deal.

As for Kumho Tire’s maturing debts, the creditors rolled over 1.3 trillion won worth of debt that matured in June by three months out of its total debt valued at 2.2 trillion won.

Because creditors signed the deal to sell the debt-ridden tiremaker to Qingdao Doublestar, they are widely expected to extend the maturity date for the remaining debts.

When it comes to obtaining the authorities’ approval, industry watchers do not expect the Seoul government to reject the deal.

Kumho Tire, which earns about 22 percent of its sales from North American operations, opened its first U.S. plant with an annual capacity of 4 million units in Georgia in May 2016.

Its global capacity reaches 65 million tires a year. It has three domestic plants and five overseas plants in the U.S., China, and Vietnam.

Kumho Tire’s net losses narrowed to 37.9 billion won for the whole of 2016 from 67.5 billion won a year earlier, according to a regulatory filing.