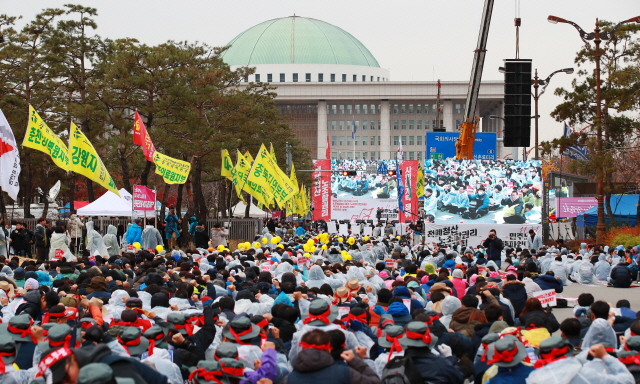 SEOUL, Nov. 21 (Korea Bizwire) — A major South Korean labor umbrella group staged a one-day strike across the country Wednesday as a show of opposition to political parties’ move to revise a new work-hour system and demand the abolition of non-regular jobs.

The Korean Confederation of Trade Unions (KCTU) said over 90,000 affiliated unionized workers joined the walkout, short of its expectation of 160,000.

Protest rallies were held in 14 different places nationwide, including one at the National Assembly in Seoul that drew about 10,000 participants, according to the KCTU and police.

Police warned earlier that they would be vigilant against potential clashes or accidents during the demonstrations. No clashes occurred during the rallies.

The labor group opposes a potential revision in the new 52 hours per week system as rival parties are reviewing a change to allow for a more flexible operation of the scheme in consideration of the businesses’ complaints.

The flexible working hour system calls for adjusting weekday working hours to 40 hours by allowing a worker to take a break to make up for overtime work within a certain period.

Political parties are considering extending the current three-month limit to six months or one year.

The labor unions said that if adopted, the new system could hamper workers’ health and offset the effect of reduced working hours.

The KCTU is widely in contention with the liberal Moon Jae-in government over labor policy.

The group refused to join a new multilateral committee seeking social dialogue that involves representatives from the labor, management and the government, as well as other experts. The Federation of Korean Trade Unions, another labor group, will participate in the panel.

The committee will set sail Thursday as an expanded version of a trilateral committee on the labor, the management and the government.

The ruling Democratic Party (DP) expressed regret over the strike, urging the KCTU to seek to resolve the contentious issue through dialogue.

“It is regrettable that the group chose to stage a strike without resolving major labor issues through dialogue,” Hong Young-pyo, the DP’s floor leader, said at a meeting with senior party members.

He said that the National Assembly will push for the legislative process if labor and management reach an agreement on details of an extension of the flexible work time scheme.

The main opposition Liberty Korea Party and the minor opposition Bareunmirae Party denounced the labor group’s strike. They claimed that the KCTU should take part in labor reforms.