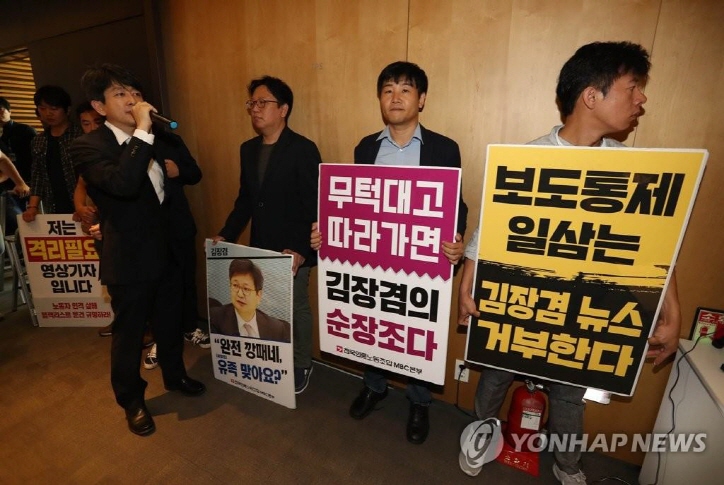 Union members at MBC protest in front of the president’s office on Sept. 4, 2017. (image: Yonhap)

Union members associated with the National Union of Media Workers at KBS and MBC, two of the country’s biggest terrestrial networks, started a sit-in at midnight Sunday, calling for the removal of the networks’ management and the restoration of independent, fair reporting.

The dual strike at both networks is the first since 2012. The number of unionists joining the strike amounts to 1,800 at KBS and 2,000 at MBC.

The massive walkout by journalists and production crew means a disruption to the broadcast of a slew of programs.

KBS has canceled or shortened some of its news programs starting Monday while indefinitely postponing the broadcast of the Korean Broadcasting Awards, which was slated for 3 p.m. the same day. Also it hasn’t been determined yet when the 12th Seoul Drama Awards, to be filmed at KBS on Friday, will go on air.

Early in the morning, MBC President Kim Jang-kyeom came to work at the network’s headquarters in Sangam-dong, western Seoul, to check up on the network’s operation and encourage staff.

“The operation of the territorial network should never be interrupted no matter what. Emergency staff’s efforts will be crucial to the independence and freedom of broadcasting,” the network quoted Kim as saying.

A few hours later, MBC said in a statement Kim will present himself at 10 a.m. Tuesday at the Seoul’s Seobu Regional Labor Office to undergo questioning.

Last week, an arrest warrant was issued for Kim after he had failed 4-5 times to respond to the request by the Ministry of Employment and Labor for questioning about alleged unfair labor practices at the network.

Kim had sufficiently answered questions in a written statement and considered the request for a physical appearance at the regional labor office as heavy-handed, unnecessary measures that threatened to tarnish the independence and freedom of the press, read the statement.

Prior to the release of the statement, MBC union members strongly urged Kim to answer the ministry’s request for a probe and, ultimately, to leave the network.

“Kim is accused of violating labor laws, and we don’t want to see the incumbent president of MBC being questioned by the labor ministry,” said Kim Yeon-guk, head of MBC labor. “The management should also step down together with Kim.”