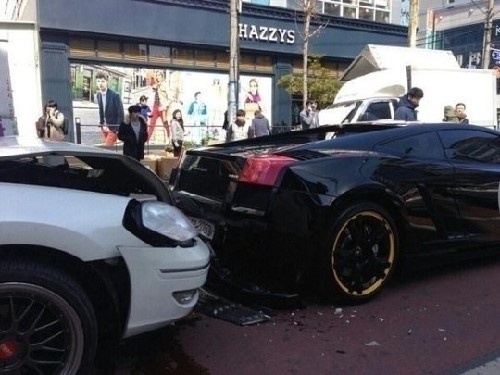 Eventually, the two drivers confessed that they had faked the accident, and that they knew each other before the incident occurred. (image: Geoje Police Station)

SEOUL, March 19 (Korea Bizwire) — A car accident between a Lamborghini Gallardo and a Renault Samsung SM7 on March 14, which resulted in sympathetic opinions from Korean SNS users, turned out to be a fraudulent scheme planned by two drivers seeking a big insurance payout, according to an announcement from Dongbu Insurance on March 18.

The SM7 driver, who works as a welder, attracted an outpouring of public sympathy when it was discovered that he would have to pay 140 million won (US$ 126,000) to compensate for the damages. Some SNS users even suggested helping the poor welder by donating some money.

However, Dongbu Insurance employees, including an ex-cop, investigated further as they saw holes and inconsistencies in the two drivers’ statements regarding the accident. Eventually, the two drivers confessed that they had faked the accident, and that they knew each other before the incident occurred.

Dongbu Insurance said that the company had yet to compensate the SM7 driver, and would sue both drivers. The police will also launch an investigation into the case.