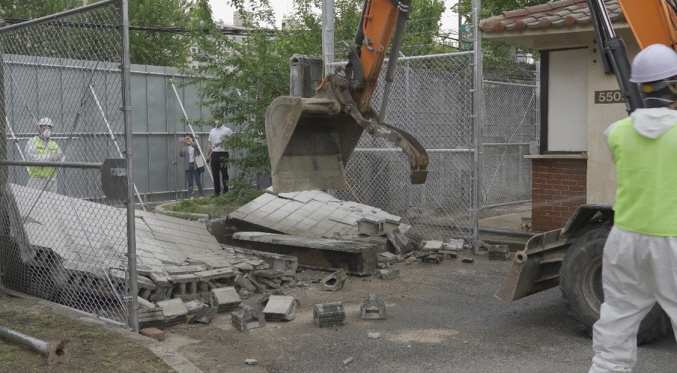 This is the first time that South Korea has removed the wall ever since it was first built around Yongsan Garrison in 1952. (image: Ministry of Land, Infrastructure and Transport)

SEOUL, May 18 (Korea Bizwire) — The portion of a fence dividing the commissioned officers’ quarters at the Yongsan base of U.S. Forces Korea (USFK) and the outside world has been taken down to begin the first phase of opening up the old military apartment complex to the public.

The Ministry of Land, Infrastructure and Transport took down a 15-meter-long wall near the garrison in central Seoul on Friday to begin renovation of the old apartment complex to the public.

The wall will be replaced with an entrance for construction vehicles.

This is the first time that South Korea has removed the wall ever since it was first built around Yongsan Garrison in 1952.

Construction vehicles will use the new entrance as part of a project to turn a certain portion of the apartment complex into exhibition halls, resting areas, and conference rooms, to fulfill the decisions made by Yongsan Park Preparatory Committee last December.

The Korea Land and Housing Corp., after receiving the land back from the USFK in 1986, built the apartment complex which the USFK had been renting until last year. Now, the buildings remain empty.

The government has been planning to open up the area to the public later this year, to offer an early experience of what it’s going to be like when the entire Yongsan Garrison is returned to South Korea.

Once the apartment complex opens up to the public later this year, visitors will be able to freely access the area without restriction by the U.S. forces, enjoying leisure and taking a look at future plans for Yongsan Park.