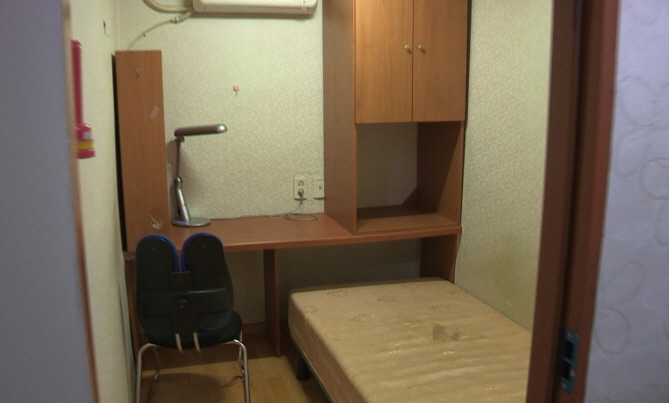 Previously, gosiwon and other multi-purpose facilities had no housing guidelines to follow except for the width of the corridors, allowing gosiwon to be filled with rooms as small as 3.3㎡ without any windows. (Yonhap)

According to the new guidelines, new gosiwon rooms in Seoul must be at least 7㎡ in size (10㎡ including the restroom) and have at least one window.

Previously, gosiwon and other multi-purpose facilities had no housing guidelines to follow except for the width of the corridors, allowing gosiwon to be filled with rooms as small as 3.3㎡ without any windows.

A recent investigation led by the Seoul Metropolitan Government showed that the average room in gosiwon was 4 ㎡ to 9㎡ in size, with almost three-quarters of the rooms left without windows.

Seoul plans to immediately apply the new guidelines to old gosiwon going through renovations and ask the Ministry of Land, Infrastructure, and Transport to revise standards of construction design, which will allow changes in relevant legislation to make the new guidelines legally binding.

Without these changes, the city will not be able to impose the new guidelines on gosiwon, which are private businesses.

Seoul also plans to increase funding for installing sprinklers by 2.4 times to invest as much as 1.5 billion won (US$1.3 million) to install sprinklers in old gosiwon at 70 locations throughout the city.

Gosiwon that participate in the city’s initiative to install sprinklers will be able to raise their rent fees every 3 years, instead of 5.

The incentive comes as part of the city’s strategy to encourage more gosiwon to participate in the sprinkler project.

Seoul also plans to work with the government to amend relevant legislation and carry out incentives to install sprinklers in all gosiwon in the city within the next 2 years.

A safety law passed in July 2009 obliges the installation of sprinklers in all multi-purpose facilities. However, gosiwon have been exempt since they were in operation before the law was passed.

Among some 5,840 gosiwon in Seoul, which accounts for almost half of all gosiwon in the country (11,892), 18.2 percent (1,071) of them were in operation before the law came into effect and are exempt from the obligation to install sprinklers.

Seoul, with government support, also plans to carry out additional projects to install sprinklers in gosiwon without the rent fee benefits.

Gosiwon residents will now be eligible to apply for the Seoul Housing Voucher project for low income earners where the city partially pays for monthly rent.

Based on the project, gosiwon residents will now be able to join some 10,000 households receiving 50,000 won each to pay for monthly rent.

The city will invest 5 billion won to test the new ‘gosiwon living lounge’ initiative that aims to raise the residence quality at gosiwon.

The initiative involves renting buildings in locations highly populated by gosiwon to use them as shared laundromats and shower rooms for gosiwon residents.

The city also plans to help gosiwon with deteriorating facilities to be renovated into share houses that can significantly improve living conditions.

“The initiative will serve as a bedrock of protecting the safety of gosiwon residents and their quality of life,” said Ryu Hoon, head of Seoul’s housing and construction headquarters.