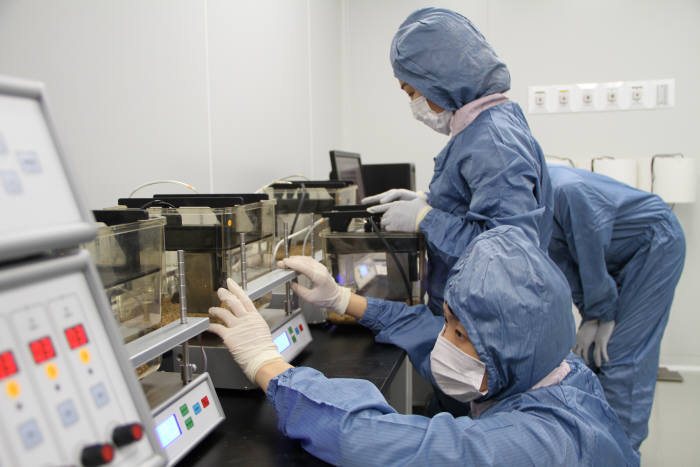 DAEGU, July 27 (Korea Bizwire) – The Korea Brain Research Institute is opening a new animal experiment facility for brain research that will be the largest of its kind in Korea.

According to the institute, workers are now putting the finishing touches on the equipment in the ‘behavior analysis zone’ at the Animal Experiment Center, which will be ready for full-scale experiments starting in August.

The center has research spaces on two separate floors covering 3,760m2, and it houses a clean-breeding facility and behavior analysis, image analysis, and disease-model zones. The facilities provide a one-stop shop that allows for research into topics such as developing animal models for brain diseases, clean breeding, and behavioral analysis.

It can also accommodate over 28,000 small animals, namely, mice, giving the center the nickname ‘Mouse Clinic’, or ‘Mouse Hospital’. The center is already breeding some 3,500 animals.

The key facility, according to the institute, is the behavior analysis zone, which allows for in-depth analysis and comparisons of and between healthy animals and ones with brain illnesses. The zone is equipped with various research instruments that can analyze both physical and brain functions of animals, including memory, learning, addiction, exercise, anxiety, depression, and metabolism.

The center will also be equipped with LABORAS, a highly-advanced activity analysis system that recognizes various types of rat and mouse behavior by analyzing the forces that are created by the animals’ movements. The system is completely non-invasive, and allows activity analysis for over seven days.