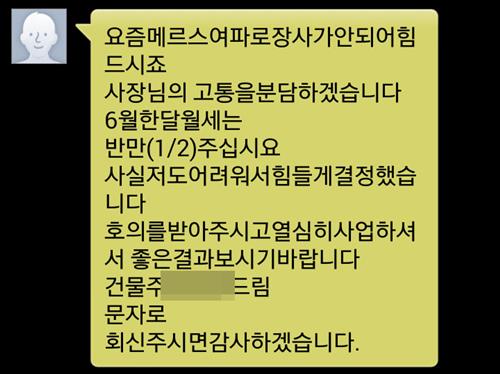 The message read, “To share your pain in suffering from the aftermath of the MERS spread, I will expect to be paid only half of the monthly rent for this month.” (image: Yonhap)

CHEONGJU, Korea, June 25 (Korea Bizwire) – An impressive text message from a building owner to his tenants became the talk of town in Korea. The good-hearted landlord cut monthly rents by half after tenants suffered from financial difficulties due to the widespread Middle East Respiratory Syndrome (MERS).

On June 21, Lee In-soo (50), who runs a tuna sushi restaurant in a five-story building in Cheongju, received a text message from the owner of the building. The message read, “To share your pain in suffering from the aftermath of the MERS spread, I will expect to be paid only half of the monthly rent for this month.”

Lee said, “I am very grateful that the landlord cut the rents by half in this time of fewer customers due to the deadly infectious disease.” The message was also sent to other six tenants in the building.

The landlord, who refused to identify himself, has not raised the monthly rents of the stores in the building for the past 20 years. Among the tenants, the landlord was called a “good-hearted building owner.”

The landlord even felt sorry for not cutting the rents further. “I once ran a store and I know how small business owners feel when there are few customers. I want to cut all the rents but I have to receive the other half to manage the building.”

“I just want the tenants to do their business well and overcome the current hardship, and hope the rent cut helps their living situation,” added the good-hearted landlord.

Meanwhile, on June 25, South Korea reported an additional two deaths from MERS, along with an additional case that put the total number of people diagnosed with the disease at 180.