In 2012, when Michael J Sandel visited Yonsei University in Seoul, South Korea, he was greeted by more than 13,000 students and citizens eager to have his lecture on the theme of  “On What Money Can’t Buy: The Moral Limits of Markets”.

SEOUL, Dec. 6 (Korea Bizwire) – Michael Sandel, a Harvard University professor and the author of “Justice”, will become a Seoulite.

The Seoul Metropolitan city government announced on December 5 that the political philosopher will be receiving honorary citizenship after meeting Mayor Park Won-soon. He plans to give a lecture to 500 Seoul municipal workers on the topic of “Justice, Markets and the Good Society.”

Following the lecture, the professor will meet the Mayor to talk about what constitutes “good” administration. Mr. Park will give him a paperback entitled “Justice & Citizens’ Rights in Seoul” to share examples of how the city government has practiced Mr. Sandel’s philosophy in its policies.

“His special lecture will be a good chance for us to connect administration and justice. There will be various discussions to realize a good administration,” Mr. Park said.

On October 28, the city government gave honorary citizenship to 16 foreigners who have tried their best to contribute to Seoul’s improvement. Lawyer Jeffrey Jones, who has helped poor students by establishing a not-profit foundation called the Partners for the Future, became an honorary Seoulite. 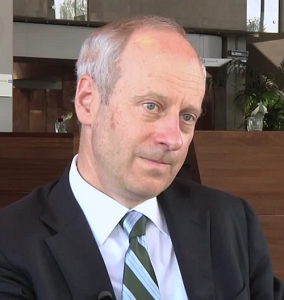 Ibrahim Abdul Ghani, CEO of Star International in Nigeria and committee member of local police agencies, was also made an honorary citizen. Thomas Geyer, President of the Korean-German Chamber of Commerce and Industry, became an honorary Seoul citizen for his contribution to relationship-building between the two countries.