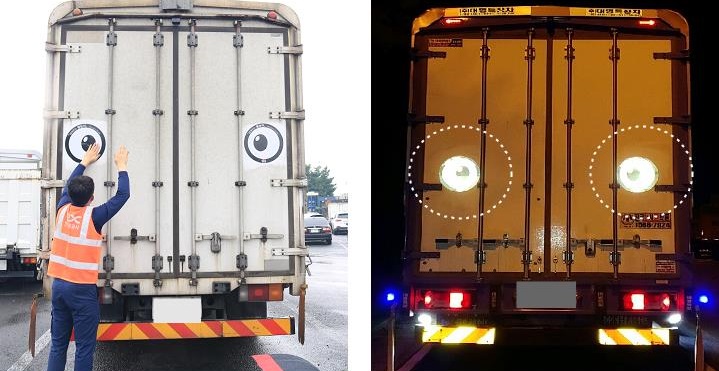 The stickers were invented based on the effect of the so-called watchful eye. (image: Korea Expressway Corp.)

The state-run Korea Expressway Corp. (KEC), which manages South Korea’s highways across the nation, developed large reflective stickers in the shape of an eye to prevent dozing off at the wheel.

The stickers were invented based on the effect of the so-called watchful eye, which is known to put pressure on others to induce correct behavior with the shape or image of human eyes.

The large eye stickers naturally attract the attention of the driver in the rear vehicle during the daytime.

At night, the light of the headlights will be reflected back about 200 meters to prevent forward-looking negligence and drowsy driving.

Over the past three years, deaths from rear-end collisions involving cargo trucks on highways have represented roughly 40 percent of the total traffic fatalities, of which 60 percent occurred during the night.

Dozing off at the wheel and a lack of attention are the most common causes of rear-end collisions.

As such, the KEC’s trial run of stickers for 100 test groups in Busan and South Gyeongsang Province last year showed that 94 percent of the respondents benefited and the stickers helped prevent accidents.

When asked whether other drivers showed any interest in the stickers, 75 percent of the respondents answered that there were a number of inquiries.

Accordingly, the KEC will conduct a free-of-charge campaign to affix large eye stickers on cargo trucks and buses at major rest areas nationwide starting next month.

The KEC will also actively promote the stickers with express bus companies and delivery companies, whose vehicles commonly frequent highways.