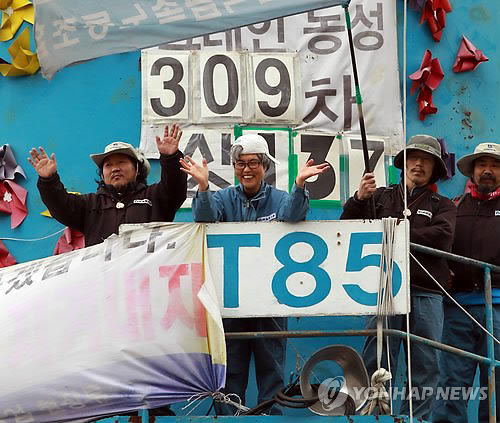 SEOUL, Sept. 18 (Korea Bizwire) — In 2011, Kim Jin-suk climbed up a shipyard crane in a high-profile protest against the dismissal of hundreds of workers at midsized shipbuilder Hanjin Heavy Industries & Construction Co.

The labor activist of the Korean Confederation of Trade Unions came down from the 35-meter-high tower crane in the southeastern port city of Busan 309 days later after the union of Hanjin Heavy unanimously approved a deal with the management on the rehiring of 400 workers.

“My dismissal was illegal, but it was not corrected during the period. I think it should be corrected. That’s why I fight for my belated reinstatement,” Kim said in a recent telephone interview with Yonhap News Agency.

Kim has been waging her fight to get back to work every morning since Sept. 9 at the main gate of Hanjin Heavy, holding a picket that reads, “I want to walk out of the shipyard where I was forcibly dragged out 35 years ago on my own feet.”

Kim’s ordeal started in 1986 when she just handed out about 150 copies of leaflets criticizing the leadership of the then company’s labor union biased in favor of the management.

The welder was taken into police custody three times by plain-clothes officers and tortured for 2 1/2 months for the labor campaign, which her former company used as an excuse to sack her in 1986.

In the 1980s, the then military junta suppressed South Korea’s burgeoning labor movement on the pretext of economic development and growth.

South Korea has become Asia’s fourth-largest economy through rapid industrialization from the ashes of the 1950-53 Korean War. 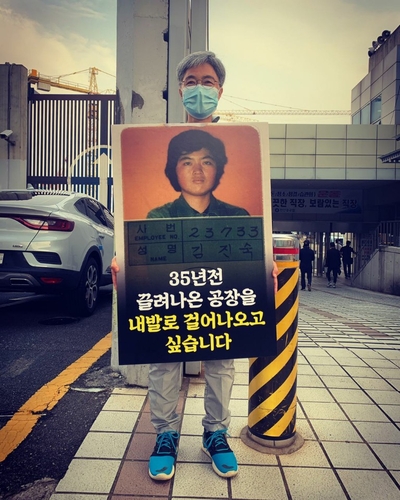 Kim Jin-suk holds a picket that reads, “I want to walk out of the shipyard where I was forcibly dragged out 35 years ago on my own feet,” at the main gate of Hanjin Heavy Industries & Construction Co. in Busan, in this photo provided by her.

But some critics say workers have failed to make a remarkable stride in their working conditions.

Kim faces daunting challenges to get her job back, 35 years after she was fired from the predecessor of Hanjin Heavy.

The legal process related to Kim’s dismissal finished in 1987, so there is no room to review her reinstatement again, an official of Hanjin Heavy said on condition of anonymity.

The Busan City Council adopted a resolution earlier this month, urging parliament, the government and creditors of Hanjin Heavy to withdraw Kim’s unfair dismissal and reinstate her as early as possible.

But Hanjin Heavy has been reluctant to reinstate Kim, citing opposition of its main creditor, the Korea Development Bank (KDB).

“The company claimed it is impossible for Kim to return to work due to the opposition of KDB,” said Shim Jin-ho, the head of Hanjin Heavy’s union under the umbrella of the Korean Metal Workers’ Union.

“KDB and the company have been keeping passing the buck to each other over Kim’s reinstatement,” Shim said.

KDB referred the issue of Kim’s reinstatement to Hanjin Heavy.

A reinstatement — even if approved — would just be a symbolic victory as Kim has to leave the shipbuilder at the end of this year due to her age. 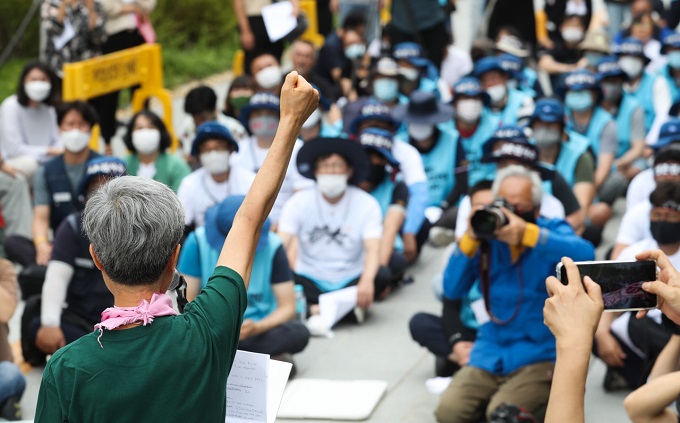 Kim’s campaign for reinstatement comes amid new concerns among unionized workers at Hanjin Heavy over possible massive layoffs due to the shipbuilder’s proposed sale.

KDB has put the shipbuilder up for sale with the aim of completing the deal within this year.

Hanjin Heavy has long suffered a liquidity crisis due to sluggish performances of its shipbuilding subsidiary in the Philippines.

HHIC-Phil Inc. in the Subic Bay Freeport Zone on the west coast of the island of Luzon has been suffering massive losses since 2016 due to a drop in new orders amid the protracted slump in the global shipbuilding industry.

Some critics say most companies in South Korea try to solve their financial difficulties caused by their mismanagement by cutting jobs.

The country’s power plant builder Doosan Heavy Industries & Construction Co. plagued by a cash shortage due to the management’s wrong decisions also tried to tide over its financial crisis through a retirement program in the first half of the year.

The rehiring of fired workers is not unusual in South Korea.

In recent years, SsangYong Motor Co., the maker of the Rexton and Tivoli SUVs, rehired 119 workers who were fired amid the carmaker’s restructuring efforts more than a decade ago.

“The reason why Kim Jin-suk is seeking to get back to work is to make sure sacked workers are not forgotten (for no good reason) and to stop workers from being dismissed from their jobs,” Mun Jeong-hyeon, a Catholic priest and peace activist who supports Kim’s reinstatement said at a July rally.