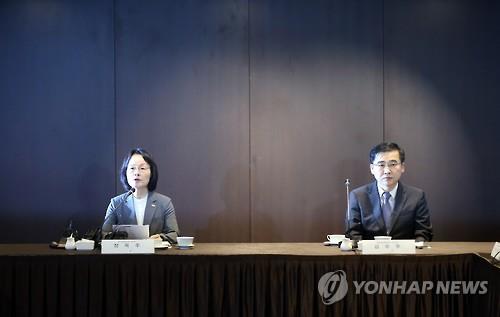 South Korea’s Vice Health and Welfare Minister Chang Ok-ju (L) speaks at a joint meeting of government officials and private experts to discuss ways to deal with the MERS outbreak in Seoul on July 27, 2015. (image: Yonhap)

SEJONG, July 27 (Korea Bizwire) — The last suspected patient of Middle East Respiratory Syndrome (MERS) in South Korea was released from isolation Monday as the country reported no additional cases of the disease for more than three weeks, the government said.

The number of people diagnosed with the disease remained flat at 186 for the past 22 days, with the release of the last suspected patient indicating a very slim chance of the country reporting an additional case.

Since the country reported its first MERS case on May 20, some 16,700 people have been subject to isolation as suspected cases.

All of them have been released as of Monday as they showed no symptoms of the disease for more than the known maximum incubation period of 14 days, according to the Ministry of Health and Welfare.

The country’s death toll from the disease has also remained flat at 36 for the past 15 days.

Out of the 186 diagnosed with MERS so far, 138 have been discharged from hospitals following complete recoveries while the remaining 12 still remain hospitalized.

However, 11 of the 12 remaining patients have already tested negative for the disease, and only have recovered from other complications caused by MERS, ministry officials said earlier.

With no additional cases, the country was expected to declare what the officials have called a “de facto” end to the outbreak early next month.

An official end to the outbreak is expected to be made later in August as World Health Organization rules require a 28-day waiting period following the recovery of the last patient, according to the ministry officials.

MERS is a viral respiratory disease that was first reported in Saudi Arabia in 2012.

The disease has since claimed over 530 lives throughout the world, posting a fatality rate of some 36 percent.

In South Korea, the fatality rate remains at 19.4 percent.

No vaccine or treatment is currently available for the disease.