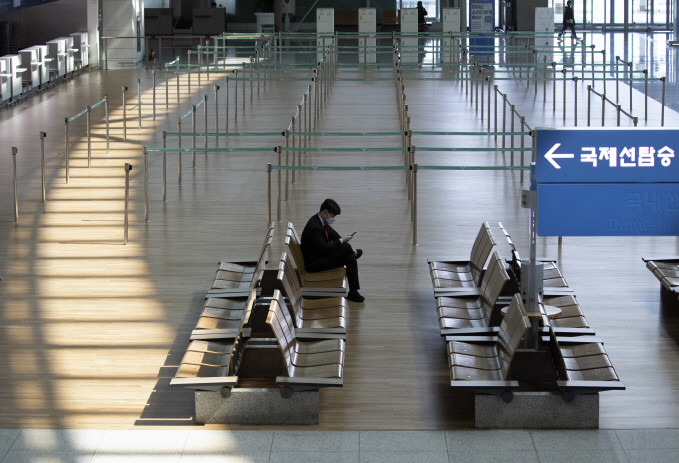 The departure hall of Inchon International Airport, west of Seoul, is almost empty on March 30, 2020. (Yonhap)

SEOUL, April 6 (Korea Bizwire) — Not a single Chinese national entered nor departed from South Korea last Saturday, the Ministry of Justice said Monday, amid strict entry restrictions imposed by both countries due to the coronavirus outbreak.

According to the ministry’s data obtained by Yonhap News Agency, no Chinese, including flight attendants, arrived here from China and left South Korea for China for 24 hours from midnight Friday to midnight Saturday.

It is the first time since the establishment of bilateral diplomatic ties in August 1992 that the number of Chinese flying into or out of South Korea has recorded zero people.

Ministry officials speculate that strident entry restrictions by Seoul and Beijing for foreigners have resulted in the disappearance of Chinese travelers to and from South Korea.

Prior to the COVID-19 outbreak, an average of 15,000 Chinese people entered South Korea per day in January, and the number of Chinese departing here for China averaged 18,000 per day in the same month.

The number of air passengers between the two countries has also plunged.

A total of 49 people arrived here from China last Saturday and 37 of them are Koreans. On the same day, 70 people, including 27 Koreans, departed here for China, with the rest being non-Chinese foreigners.

Seoul has temporarily suspended more than 81,000 visas issued by the South Korean Consulate General in Wuhan, central China, since Feb. 4, when an entry ban for non-Korean travelers from the epicenter of the new coronavirus and its surrounding Hubei Province took effect.

Since April 1, all arrivals in South Korea from abroad are obliged to self-isolate for two weeks.

South Korea’s confirmed coronavirus cases totaled 10,284 as of Monday, with a daily increase of 47.