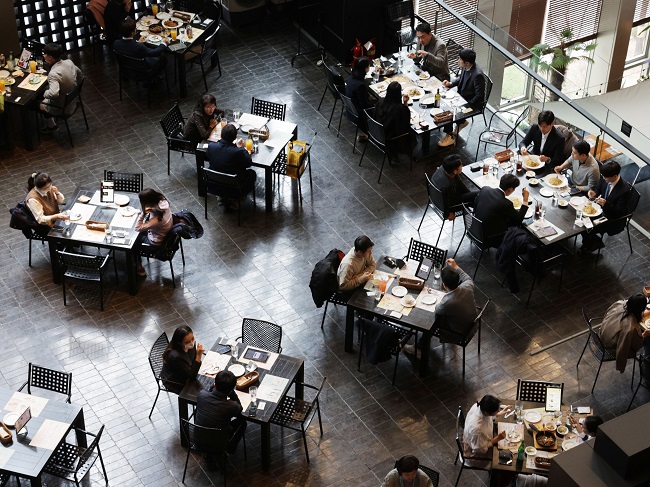 This file photo, taken March 18, 2022, shows citizens having lunch at a restaurant in Seoul. (Yonhap)

The number of people employed at restaurants and eateries reached 1.56 million last October, up 19,000 from a year earlier, according to Statistics Korea.

The tally slowed from an on-year increase of 65,000 six months earlier. But it marked an improvement from October 2020, when such workers fell by a record number of 179,000 due to the pandemic.

Still, the total number of workers in the food service segment stayed below pre-pandemic levels, pointing to the prolonged impact of the pandemic on in-person services. In April 2019, the number of such employees reached 1.72 million.

Workers in the food service sector accounted for the largest share of 5.6 percent of the total 27.7 million employed people in October last year, the data showed.

The face-to-face service segments, such as hospitality and retailers, were hit hard by tougher virus restrictions. At one point, the government limited the size of private gatherings to two at night and imposed curfews at restaurants and cafes at 9 p.m.

Retailers that have no offline stores saw the number of workers rise 14,000 on-year to 373,000 in October, in line with non-contact consumption trends.

South Korea’s job growth slowed in March from the previous month as in-service segments were hit by the fast spread of the omicron variant. But the country reported job additions for the 13th straight month last month.

The number of employed people came to 27.75 million in March, up 831,000 from a year earlier, according to the statistics agency.